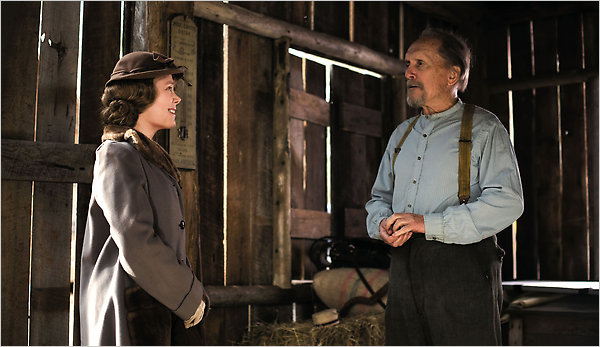 
An annoying hermit's "final arrangements" turns out to be a refreshing experience in Aaron Schneider's elegantly mounted, down-to-earth Get Low.

This initially churning, gradually involving, if uncommon 1930s Southern drama has enough grace and choleric wit going for it, notably in the larger-than-life character endearingly etched by Oscar-winner Robert Duvall.

His Felix Bush is the stuff of malevolent legend which have upset denizens and visitors just by mentioning his name. The recluse (known as a "crazy old nutter") has resided for some four decades in a cabin in the Tennessee wilderness in which anyone passes is considered an intruder. An onlooker realizes how he is though all, including Felix himself, think otherwise.

The storyline by Schneider striving for dramatic soundness has Bush unusually dropping into town with a shotgun and loads of cash for his "living" funeral. He's got an itch to know what the neighbors have to say about him all these years. Putting his notorious reputation on the line could put his precious privacy in jeopardy.

Acquiescing in Felix's need to leave the woods for a while to reacquaint himself with a "malcontented" civilization are funeral home proprietor Frank Quinn (Bill Murray of Zombieland) and a young apprentice who knows a little of the recluse's seedier reputation, Buddy Robinson, an earnest Lucas Black. Black's boyish family man ably becomes a viewer surrogate.

There's not too much to the premise which works quite well off of Bush's unpredictable nature, and the film's subdued perspective. Ultimately, a long-held secret will be stripped away as Frank and Buddy set up an event where a raffle event will be entitled to Bush's expansive plot.

One of the better passages occurs from the utterance of the titular, if oblique dialogue as this erratic man seemingly becomes more articulate. Murray, perhaps due to Frank's ambition, might anachronistically stray a little, in a fairly snappy, wry opportunist turn. Bill Cobbs is the steadfast Illinois preacher asked to preside over the proceedings, while Sissy Spacek (at least equalling the warmth of her work in The Straight Story) radiates much dramatic heft with Duvall as weary, yet concerned widow Maddie Darrow, probably the only local who really knew Felix.

It turns out that the transformative portrait of Felix straying from a cozy incarceration provides some mystery and unfolds with deceptive, subdued magnitude. Schneider and his crew ably capture all the period details, including those oil lamps and antique vehicles, not to mention wrinkled skin, wood stains and shafts of sunlight.

It's the carefully, honest deliberations by a somewhat unrecognizable very hirsute Duvall at the outset from the wild and wistful observations into an emotionally stilted, yet haunted and wizened old coot who really isn't much like he makes himself out to be.

When a somewhat tilted but spatially resonant Get Low really gets down to more soulful stuff, it's clear why the actor who started out as Boo Radley in To Kill A Mockingbird and played opposite a dissolute Jeff Bridges last year in Crazy Heart continues to shine in the twilight of his career.