Get Him to the Greek 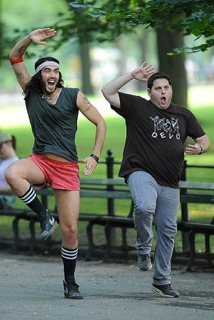 
This uneven off-shoot or sequel to Forgetting Sarah Marshall doesn't aim to generate much suspense from its premise, but its unsubtle nature provides consistent, albeit vulgar, comedic returns.

Get Him to the Greek, produced by Judd Apatow, features Jonah Hill, Russell Brand, Rose Byrne, and Sean 'P. Diddy' Combs, and more than gets by with a certain, if suitable lacerating silliness.

In the mostly raunchy script by director Nichollas Stoller (also back from Marshall) who doesn't quite stage it all with the same wacky winsomeness, Aaron has to go to London to get Aldous back to LA in three days. Of course, there are stops in the Big Apple and Sin City which makes the inevitable seem a little dicey for awhile.

The arc of this sometimes hysterical, but lurching tale is predictable, but still more often fun in how it navigates through some elaborate set pieces. The fellow with a libido of his own is going through a split with seven-year mate Jackie Q (Byrne, initially like a spangled bimbo) and Aaron with his resident intern girlfriend Daphne (Elisabeth Moss of the original TV series "Mad Men").

Most of the enjoyment comes from Hill and Brand playing off one another in wacky, but sometimes thoughtful ways, as the former dials down from his wilder ways (though the hedonism creeps in especially before a "Today" show segment). Brand keeps his unctuous spontaneity intact, as Aldous begins to realize the importance of restaging this gag, not only for himself - with his son (Lino Facioli) - but for Aaron as well.

Stoller tempers the racy aspects with scrupulousness and sentimentality that mars the tone and flow, but gets the most out of his colorful cast. Besides Hill and Brand, it's hard not to notice the impact of Combs as Aaron's foul-mouthed, interjecting boss Sergio Roma who makes the most of his hard-driving Kobe Bryant, family-loving man. It reminds one of what Tom Cruise brought to Ben Stiller's Tropic Thunder as bald-pated Les Grossman.

In addition to the full-on Combs, Byrne (very good on the small-screen "Damages") brings a nice teasing seductiveness to Jackie as first seen in the "African Child" video (the worst thing since Apartheid as noted). And, Colm Meaney is in one of the shows-stopping scenes as Snow's liquored-up Las Vegas guitarist showman estranged father. There's even Bell in one of the cameos as Sarah is seen in an ad for a new medical drama on TV.

Get Him to the Greek delves darkly at times into roles within contemporary relationships with a certain blithe, watchable mania, not trying to be an original. Apatow's stamp on the project usually means the arrested-development types will be at a crossroads. But, for its addled and raunchy ways, besides jabbing at the music business and entertainment reporting like "Extra" and "TMZ", it has an odd amusing and cathartic touch from rubbing a furry wall.