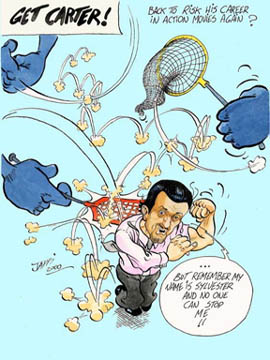 Lost in quirky camera angles, lousy direction and an even worse script, Get Carter loses the edge the 1971 version had and never reaches its potential.  This attempt to update the 1971 classic of the same name falls short in every facet of film making.  Perhaps this film will used as a teaching device for film students and aptly renamed "Get a Clue" as Get Carter is another example of why movies should not be remade.

Sylvester Stallone is once again the star of a movie portraying him as the ultimate tough guy.  While this is what we expect from a Stallone flick, the movie lacks suspense, excitement, character development and as a result, credibility.  Just compare opening scenes: 1971: has Michael Caine snorting cocaine; 2000 has Stallone putting luggage in an overhead compartment.  It just gets worse from there.  The fight scenes look staged, the dialog makes no sense and the use of fast motion is overly and poorly used.  To make the ultimate insult, even the car chase scenes were boring.

Most notably missing from this version is the "phone sex" scene from the original.  This was a classic moment in cinema that the writer or director chose to omit.  This was probably the best decision that they made, as with the rest of the film, it would have been destroyed.

After nearly three years of screen absence, Stallone's choice of this film feels of desperation and, to quote Stallone when asked about his three year absence by author Susan Faludi, he stated "I see everyone else working and I'm not doing dick".  With script choices like this, "dick" is all he is likely to do in the future.