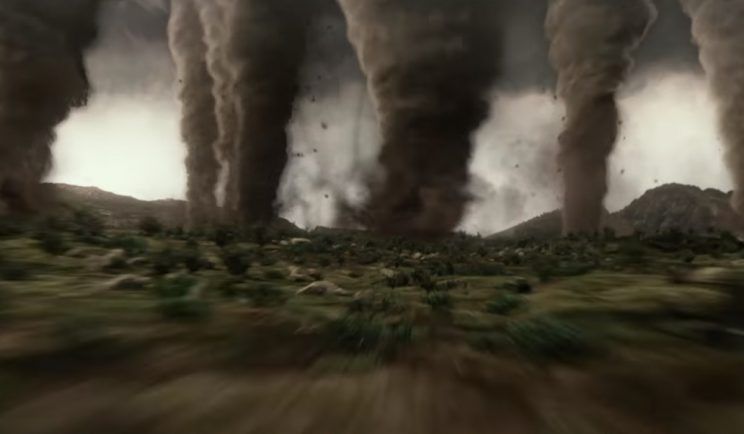 
Geostorm is a film that promises to be a disaster film but in many ways fails to live up to even that small expectation.  The film follows Jake Lawson (Gerard Butler), the creator of a satellite system that controls weather patterns.  When the satellites start malfunctioning he heads into space in order to figure out what is wrong.  Meanwhile his brother Max (Jim Sturgess), who is the current director of the program, uncovers that these malfunctions may not be all that they seem.  The two must then work on their fronts to solve the problem before the satellites trigger a world wide storm (aka geostorm) that would wipe out most of the world's population.

When it comes to disaster films I generally expect these films to be thin on plot and heavy on the destruction, similar to previous disaster films like San Andreas and 2012.  However, for some reason this film does the exact opposite.  The film decides to throw a somewhat competent plot that focuses mainly around a conspiracy theory that offers decent character development for our two main characters.  Jake and Max's relationship is the main focus of the film and it tries to carry the film with that, and to an extent it works.

Unfortunately for all the effort they tried to put into their plot they just seemed to forget that this was billed as a disaster film and boy does it disappoint on that front.  If you've seen any trailers for the film then you have pretty much seen the extent of what the film has to show for destruction.  Apart from one scene each "disaster" is more or less 15-30 seconds of people running away from things in the destruction in the distance which is really just plain boring to watch.  It's like each scene was only designed to be in a trailer then pieced together to try and look coherent.  Not to mention the effects for the destruction just looked bad when comparing it to similar films.

In the end Geostorm is a rather disappointing film to watch.  While I will praise the film for trying to create a decent plot driven disaster film, it lost sight of what kind of movie it was.  There is a balance to be struck between the two (look at Twister for example) and a good movie could've been had here.  But instead this film is just worth skipping.