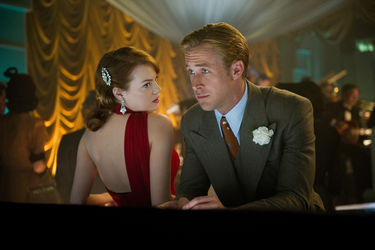 
Gangster Squad captures some of the salty, slick stylishness of the late 1940s with modern techniques to sonorous, occasionally startlingly visceral effect. Almost like an elegantly produced comic-book as predictably adapted by former detective Will Beall that may remind some cineastes of Dick Tracy and The Untouchables. Spaced and glossy to a fault, a pulpy period movie doesn't resonate through its cold-blooded resolute machinations to recapture a time and place during Hollywood's Golden Age.

Ruben Fleischer's latest starring Sean Penn (The Tree of Life) and Josh Brolin (Men in Black 3) as bad guy/good guy adversaries Brooklyn-born Mickey Cohen and ex-WWII soldier and "honest cop" John O'Mara for "the war for the soul of Los Angeles." At least, as mentioned by Nick Nolte's L.A. police chief in a time when there was much optimism  to help define a postwar era of burgeoning prosperity.

The mayhem at the outset involve slicing and dicing, evisceration, beating, stabbing, shooting and punching to get one into the relish a prosthetically-padded Penn puts into his tempestuous, bellowing Cohen. A notorious mobster who has the upper echelons of the city in his grip besides his goons is perceived as much more dangerous than the portrait may indicate.

The path to clean the rot from the City of Angels in which East Coast Cohen advances his prostitution, racketeering and heroin enterprises is through damsel in distress server O'Mara. His pregnant wife (Mireille Enos of the Americanized, TV series The Killing) tips the square-jawed, honorable crime-fighter into assembling the titular lineup.

Giovanni Ribisi (Ted) is a gadgetry guru, Anthony Mackie (Man on a Ledge, The Hurt Locker) is the blade-savvy Harlem cop, while there is an upstart as played by Michael Pena (who gained accolades as a present-day cop in End of Watch) and older cranky sharpshooter done by Robert Patrick. And, Ryan Gosling puts some wisecracking debonair panache in his cynical partner Sgt. Jerry Wooters. Gosling has his moments with (Crazy, Stupid, Love.) costar Emma Stone (The Amazing Spider-Man) as Cohen's linguist, and glamorous moll Grace Faraday, but they don't really have the same spark here in what is mostly unplumbed and has a much higher body count than Fleischer's surprisingly good comedic take on the horror genre, Zombieland.

The aural blasts of Gangster Squad often resonate more than its set pieces, characters, or storyline as the shoot was affected by the Aurora, Colorado cineplex tragedy to maneuver a cinematic setting to Chinatown. Even with an estimable (almost entirely male) cast like this, there really isn't like Ribisi's genius "the brains to balance the brawn" here, though the filmmakers understand the need for some levity amid the drama and extensive use of tommy guns.

Having its way in identifying this crucial, tumultuous period through fashion, blossoming art deco and jazz, this mobster movie really doesn't aim for depth as Penn evinces his share foreboding wit in his hammy tirades. Even if a charismatic Gosling (Drive) and increasingly compromised, if decent Brolin (kind of like the Eliot Ness character here) probably do the most with their characters it's really to little available. In a time when there wasn't much liability for the law and ethics, a political redemption reflects this flashy kind of dispassionate cinema as someone notes, "He's got a smart mouth but he's dumb where it counts."