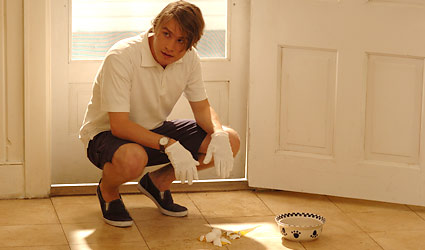 
It's rare to have a filmmaker remake his own work, but Austrian Michael Haneke (Cache) has done so with the perceptive, if deeply unsettling Funny Games.

Though this film earns its rating with its brand of intolerable cruelty, much of the violent quotient isn't on view as the director now stages the action in the U.S.

His script basically centers around two polite, if psychotic young men terrorizing a family in a cabin.

Said family consists of Anna (Naomi Watts), husband George (Tim Roth), and ten-year-old son (Devon Gearhart). They're on a summer getaway on the lake when Peter (Brady Corbet) and Paul (Michael Pitt), friends of a neighbor (Boyd Gaines), drop by for a visit.

Haneke does what Gus Van Sant did to his Psycho using identical techniques with some of his trademark long static shots. The first day of vacation for Anna, George, and their son gradually becomes horrific as the minds of Paul and Peter sadistically churn.

The soundtrack is less spare than usually for the filmmaker as the operatic morphs to thrashing metal; the design being to have the viewer experience the discomfort and maybe think about the way filmmaking has gone about of late regarding attitudes towards violent behavior.

The rhyme and reason offhandedly exhibited by Pitt (Bully) and Corbet is in sharp dichotomy to the freakishly unsettling persecution endowed in different measures by Watts and Roth. It's a vicious predicament to say the least, and Gearhart has a mercurial, if shocked nature that feels real as the control gets more brutal.

There's something slightly askew in this stately production that comments on the politically correct and the corruptible side of life which seems more prevalent as the ultimate horror appears less visible in modern society. Just like an incessantly barking dog or a peculiar neighbor.