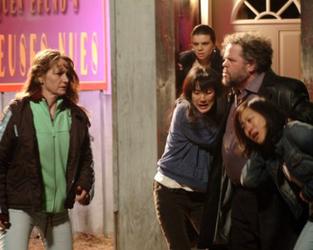 Integrated with feminism and social realism Frozen River immerses one into an illegal smuggling ring from the perspective of a Mohawk reservation area. New helmer Courtney Hunt navigates the plight of toiling Native Americans and lower-class whites with flinty finesse.

Leo is quite good as Ray who has her life upended as husband Mohawk-native Troy's gambling leaves her and her sons in a desperate situation. She wants to get teen son (Charlie McDermott) and younger Ricky (James Reilly) into a decent trailer home, but things worsen after some sparring outside a place where Troy has played much bingo.

Hunt isn't highly ambitious in letting the onlooker eavesdrop in a curious environment where Ray becomes involved with strong-willed Mohawk lady, Lila, well-played by Misty Upham. It seems that Lila under the domain of one Jacques Bruno (Mark Boone Junior of Memento speaking partially in French) from the Canadian end of the border of the frozen St. Lawrence run where she lures Ray into aiding her.

The storytelling thrives on understated characterizations that aren't easily forecasted or audience friendly. It may test patience similar to last year's subtly moral, naturalistic drama Jindabyne built from an emotional social base.

Some scenes, especially with Ray in a car, may harken back some to the memorably bleak Fargo as austerity is felt at least from the wintry environment as the polished production indicates.

Leo and the more likeable Upham make good on their opportunity to layer their characters from the burden their lives have taken on. The ability to literally and figuratively deglamorize oneself is done in a commanding way by the former, a thespian who goes to great lengths with results similar to the hard-working Richard Jenkins in The Visitor.

Frozen River may ultimately be too weathered to find the niche it deserves as the fearless Leo utilizes her talents in ways that recall her smaller part in the unchronological 21 Grams. Like The Visitor it affectingly unfolds without bringing politics to the foreground, and has the kind of backup from McDermott as the sullen teen T.J., the unctousness from Boone, and from the little-seen Michael O'Keefe as a state cop that keeps it grounded in gritty toughness.