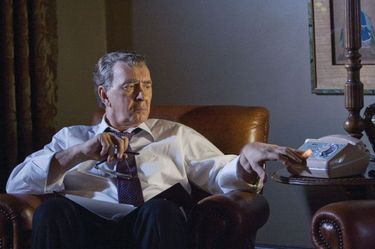 
In Frost/Nixon acclaimed director Ron Howard rebounds from The Da Vinci Code with an involving political drama that feels timely. Like the upcoming cinematic morality play Doubt starring Meryl Streep, this one is also rooted from the stage.

The director of Cinderella Man and A Beautiful Mind works admirably from an insightful script by Peter Morgan (The Queen) letting two diverse actors - Frank Langella and Michael Sheen - go at it as the disgraced American president Richard Nixon and British talk show host David Frost.

In Morgan's astute screenplay and in this sharp recreation of the mid-1970s, the insouciant Frost finds the need to resuscitate his career. With Nixon resigning in the wake of the Watergate hearings, Frost believes that a no-holds-barred one-on-one televised discussion would set the record straight. And, maybe give him the viewer ratings he desperately wants.

Matthew Mcfayden (Pride & Prejudice) is Frost's producer who is instantly interested in the project, and Nixon's minder (Kevin Bacon) and agent (Toby Jones of W.) seem to be in agreement with the terms of the interview. The kicker may have Frost in the red as U.S. television networks don't want the exposure. Sam Rockwell and Oliver Platt have amusing scenes in support as Frost's investigative staff members. They believe he's wandering into a forbidden zone, at least for him.

Langella and Sheen are striking in layering their respective characters as the story becomes subtly powerful and reaches quite a degree of poignancy. Howard has the knack of working adroitly with his production team, even without the same degree of nuance to make the melodrama work as a slick cat-and-mouse game between a flavorful interviewer and a ruthless politician.

As Frost/Nixon catches into the present day, there is casual verbal panache that underscores so much going on during the exchanges from the expressiveness of the participants to what is happening around them. Not to mention the edginess that is felt prior to Frost starting to ask his questions as each underestimates the other.

The picture is framed documentary-style with subordinate characters regaling the past, along with vivid archival footage (ala the uplifting, well-crafted Milk). Howard and Morgan let the distinctive resolve of both men come forth in scenes that elicit different emotional responses. Whether it's a futility or a strong sense of control, Sheen (who maybe looks a little too off-putting if one recalls the Jack Torrance character in The Shining) and, especially, Langella do so much from their visages. If the intended drama is a bit too obvious and overemphasized perhaps due to its antecedent as a play, then the importance of television with its crucial close-ups and the idea of accountability make this recounting of someone's legacy momentus.