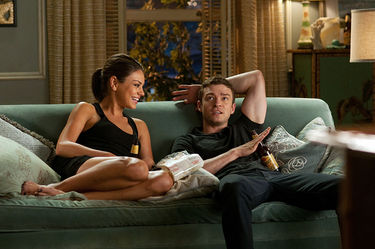 
Director Will Gluck's (Easy A) new romantic comedy is definitely raunchy, and one that I wouldn't recommend seeing on a first date.

Justin Timberlake stars as Dylan, an L.A. web site art director and Mila Kunis is Jamie, a N.Y. corporate headhunter who sets him up for a job at GQ Magazine. She picks him up at the airport and waits during his interview. When he gets hired, she has to convince him to move to the City that she loves.

She gives him a tour, they have drinks and become fast friends.   Both of them had recent breakups and aren't looking for a serious relationship, so after much soul-searching and talking, they decide what will work best for them is to have a friends-with-sex hook up.

Its a good thing that both actors are great looking, because we get to look at an awful lot of them.   Their bedroom acrobatics are sometimes camouflaged by a sheet, but mostly not.

Jamie is a petite ball of fire.   She's loud, bossy and argumentative.   She verbally holds her own with Dylan however, which is advantageous, because when they're not having sex, they're talking, talking, talking!

The talented cast also includes Woody Harrelson as a gay sports editor, Patricia Clarkson as Jamie's kooky mother and Richard Jenkins as Dylan's dad who is suffering from the effects of Alzeimers.

Even though the story has been done before, Kunis and Timberlake make it worth watching.   They have great chemistry together, and are fun to watch.