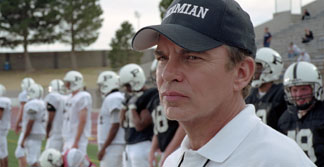 Friday Night Lights doesn’t capture the true essence of H.G. Bissinger’s best selling book, but it does embody the spirit and soul of high school football in Texas.

The book offered a candid expose of a top high school football program, but director Peter Berg is not after the same thing, he wants to put us under those lights and make us feel the heady mix of adrenalin and desperation that surrounds the games. With its mix of humanity and inspiration, Friday Night Lights is a moving yet honest effort to tap into the sport at its root levels. We know the devotion that Berg aptly displayed when he shows on game night that every business has posted a homemade sign reading, “Gone to the Game.”

Hoosiers depicted that same small-town spirit, but small town Indiana was picturesque. Friday Night Lights, illustrated by shots of scrub-land and the sun setting behind light stanchions and oil pumps, is more realistic, showing the economic devastation that struck after the oil bust. We can almost smell the dirt.

Berg also captures that elusive feeling that surrounds the game. Football is the ultimate equalizer, where players from poor, rural, big city, elite schools and our own home towns can stand on the same field and bang helmets, loins and egos. These are the most memorable times of their lives and Berg captures that flawlessly.

The dramatic action is carried by Billy Bob Thornton, who gives an appropriately low-key performance as Permian coach Gary Gaines. Instead of trying to dominate every scene he lets the film come to him, even during his big locker-room motivation speech.

Under pressure to win a state championship, Gaines remains seemingly unflappable, although he’s roundly criticized when his best player, Miles, is injured during the final minutes of a blowout.

The movie doesn’t shy away from the harsher realities of football, such as Miles’ fate or the abusive alcoholic dad (Tim McGraw) who berates his running back son (Garrett Hedlund) for repeatedly fumbling.

Gains leans on his tightly wound quarterback (Lucas Black) to carry the team, which reaches state playoffs on a tie-breaking coin flip. Waiting for them is Dallas Carter, a powerful black team with several players who will go on to play major college football.

By and large, Berg resists the temptation to go Hollywood with his game sequences, although the final bone-crushing match-up does feel a little glitzy. If everybody in these games really hit that hard, there wouldn’t be any players left in the fourth quarter.

By the time the film ends, we realize that the movie is not about life and death or war and piece, but for those who lived it, the game was even bigger.