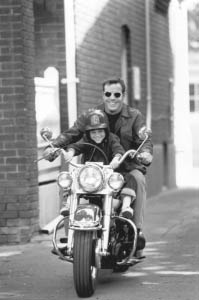 Who wouldn't want to have one more conversation with his father?  For John Sullivan (Jim Caviezel) that opportunity arises through a twist of events involving prominence on the Sun, the aurora borealis and a new found old radio that brings him into voice contact with his father (Dennis Quaid).  His father is in 1969 and he is in 1999.

Sullivan, knowing that his father will be killed in a fire on October 12, 1969 finds that playing
with time brings unexpected results.  When Sullivan helps to change the past through his father a change for the good may cause changes beyond expectations.

With a back drop of the 1969 World Series which featured the amazing Mets everyone in Queens was a Mets fan.  Frank and his son John followed every pitch of the series.  John knows of the shoe polish call and when the great Brooks Robinson strikes out.  It is John's knowledge of what will happen in the series that convinces his father that he is real, in 1999 and broadcasting from the same room in the same house at 343 as his father is thirty years earlier.

John's knowledge tips off his friend about YAHOO and changes the direction of his father's life line.  But we also watch as a nurse saves a life and endangers her own and a serial killer traveling through thirty years with finger prints on a wallet continues to kill.

The world of the Sullivans is filled with a red mustang, a motor cycle, parents dancing in the kitchen, a lonely man who lost his wife to a killer, a thirty year old body that is unearthed, a Bedroom Window scenario and a Field Of Dreams heart.

Their twisted, stylize, exciting fight for survival must go on simultaneously in 1969 and 1999 and the final surprising time travel effect is not known until the last minute.