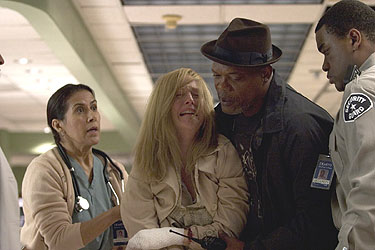 The screenplay by Richard Price, pared down measurably from his own novel to the film's detriment, has Jackson as beat patrolman, symbolically named, Lorenzo Council.

Something bad apparently has happened in the New Jersey Armstrong Project's predominantly black neighborhood. Moore's Brenda Martin is bloody and in a physically deteriorating state when entering an emergency room. She mutters about a car-jacking at night by an unspecified black assailant.

Brenda will admit later during police questioning that her dear 4-year-old son Cody was sleeping in the back of her car. Lorenzo becomes skeptical as the confession wears on and the evidence doesn't add up.

One of the subplots includes an activist mother's group, Friends of Kent, their head figure played solemnly by Edie Falco ("The Sopranos"). Trying to locate Cody would appear to bring some insight to the proceedings as racial strife escalates thinking the culprit is from the area.

It's not to say that Moore has some moments to chew on from Price's biting dialogue, but working off of a threshold of sanity, Brenda isn't as fully formed and intriguing as the one done in The Forgotten.

Roth does what he can to handle the imagery and stereotypes in a drab, tense environment, but nothing resonates with the title connecting the fragments in an area where unfortunate children have been known to turn up in ghostly fashion.

Ron Eldard and William Forsythe provide some noticeable support as a belligerent brother and a cop partner, while Falco has some good monologues. Even better is one by Moore near the climax concerning the abused, forgotten, and neglected. The line readings become overbearing as the last act sermonizes too much when it concerns race and raising children.

Jackson and Moore are performers ideal to make this dramatic cocktail potent, but even they dangle by the stubborn, street-smart restlessness at the heart of Freedomland.