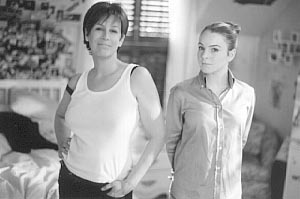 The relationship between a middle-aged mother and her teenage daughter is examined in this wonderfully silly and often thoughtful film.

Disney's remake of its own 1976 film which starred Barbara Harris and a young Jodi Foster, is hipper and more up-to-date, but at the same time doesn't lose any of its original charm.

Jamie Lee Curtis is great as Dr. Tess Coleman, a widowed psychologist and Lindsay Lohan (a terrific actress who showed her stuff as twins in The Parent Trap remake) plays 15 year old Anna.

Like any other parent and teen, there's problems between Anna and her mom.  Tess' fiancé Ryan (Mark Harmon) is a constant source of contention to Anna, and her playing in a girls' rock band doesn't sit well with mon.  But, everything is turned upside down when the two exchange bodies.

Once the trade happens, of course there's plenty of silly situations that pop up.  Tess has to deal with all the uncomfortable and unexpected things that happen to young people and Anna as an adult, is suddenly stern and unapproving of almost everything.

The actresses give very perceptive performances, changing personalities easily and embodying the nuances of another generation with ease.  Curtis is especially good with her body language, becoming unsophisticated and un-assured on cue.

Director Mark Walters (Head Over Heels) does a great job mixing the fun with just the right amount of lessons learned.  The film shows that it's not easy growing up, nor is it a piece of cake being the responsible adult.  He allows each character to come to that understanding without skimping on humor.