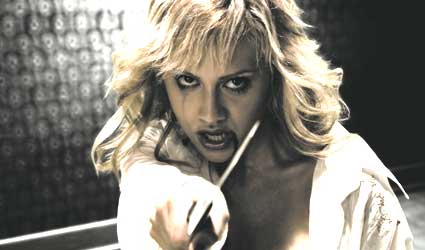 There is a bit of a controversy over who is the director but the credits give Frank Miller and Robert Rodriguez both credit which is not the policy of the director’s guild. It appears that both Rodriguez and Miller worked the script and the performances of the characters, and that Quentin Tarantino had a hand in it, also.

Opening on a high rise balcony overlooking a large metropolitan city we find The Man (Josh Hartnett) assassinating a stunning woman in a red dress (the red dress stands out because the film is in comic book light and shadow (black and white). That scene leads us into stunning creative locations which fill the entire film; they are the product of a digital world.

Performers played their parts on a blank stage and the background and foreground was added later. The technique is similar to Sky Captain and The World of Tomorrow, which was striking to watch but did disappointing box office. Frank Miller’s Sin City will succeed with comic book fans and those who enjoy innovative film making.

The three episodes in the film have a loose configuration with Shellie (Brittany Murphy) finding her way into each segment as a waitress and an abused lover of Jackie Boy (Benicio Del Toro). Bruce Willis is Hartigan who wears badge 1067 and is the last good cop who finds out just before retiring he must save an 11 year old girl (Makenzie Vega) from a rapist who is protected by political and police influence. Hartigan is near sixty and is willing to “give up his old life so a little girl can live.”

Later on Marv, an ugly disfigured lonely character (effectively played by Mickey Rourke), finds Goldie (Jaime King), a gorgeous young hooker, in his arms, her full red hair and red dress dominate the scene as he realizes she has been murdered. Knowing he will be accused he searches out his breath-takingly sexy lesbian parole officer Lucille (Carla Gugino), for help as she comfortably stands before him and a mirror without cover. This segment is even more moody and violent as it is filled with sexy hookers from the core city who are protected by the police. It all looks like a 40's black and white film noir detective story as the hookers have a deal with the cops that keeps the pimps and maffia out.

Kevin (Elijah Wood) is seen in bright white eye glasses as he goes about cannibalizing various hookers and mounts their heads on a trophy room wall. He is the most disturbing character. Part of the story also has a sick Cardinal Roark (Rutger Hauer) and a sadistic Senator Roark (Powers Boothe) all serviced by the band of hookers.

When Dwight (Clive Owen) comes along in his red 60ies Cadillac he wears red sneakers and new character Wendy looks just like Jamie King’s Goldie for a reason. Asian hooker Miho (Devon Aoki) is a regular little cut up with her marshal arts swords and Becky (Alexis Bledel) who doesn’t want Del Toro’s Jackie Boy finds that he is a talking head with blue eyes. At the same time grown up Nancy (Jessica Alba) comes along and is pursued by Roark Jr. a.k.a. Yellow Bastard (Nick Stahl).

This dark depressing film has beautiful stunning filming techniques which make it fly as a work of art and it comes full circle with Willis’ Hartigan repeating his earlier line as love actually wins, even though Josh Hartnett’s The Man is up to his old tricks at the end.