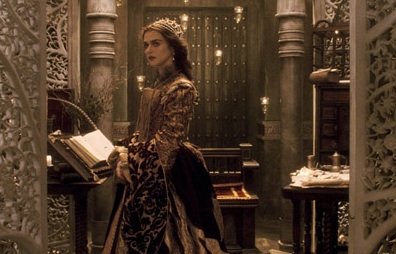 
Director Darren Aronofsky attempts a stylized interpretation of an epic journey from 16th century Spain to a 26th century trip toward a deep space nebula which serves as a constant background throughout the film.

Aronofsky who handled Requiem For A Dream in a stunning, gripping manner, has difficulty presenting this complex and complicated script. For most viewers it will be a twisted confusing combination of what may or may not appear to be three stories of one man attempting to search for and drink from the tree of Life. Of course today we know it's at Disney's Animal Kingdom in Orlando.

Initially he exists as a conquistador, Tomas Creo (Hugh Jackman); later he is Tommy Creo who struggles to find a cure for the cancer that is killing his beloved wife Isabel (Rachel Weisz). Later he is traveling through deep space as a 26th century astronaut and only then does he begin to grasp the mysteries of life that have consumed him for more than a century.

While we watch monkey brains under experimentation the main characters slip through time like participants in Slaughter House Five, loose in space moving from century to century. We suffer through the Inquisition in Spain and see the ring which appears to bind the lovers together until it's lost and then regained later. At a hidden pyramid in Mexico a dagger used for death is the key to discovering the secret that is sought so vigorously by the hero.

Death is declared a disease and therefore can be cured, but even death lacks emotion, it appears as just one more scene without passion and the series of disconnected images all appear to be separate and not part of the whole. The closest to this I can remember is George Clooney's Solaris, which floated on and on but gave the audience nothing to hold on to.

The Fountain is "Lost In Space."