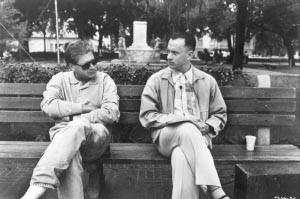 Forrest Gump's mama always said, "Life is like a box of chocolates.  You never know what you're gonna get."  Gump (Tom Hanks) is a slow-talking, slow-witted Southerner who, despite his simplicity, leads an extraordinary life.

The film begins with Forrest Gump seated at a bus stop, awaiting a bus.  To pass the time, he begins to chat with fellow travelers, reflecting on the significant events of his life.  In his slow, deliberate manner he draws the listener close to him with his poignant observations.  His memories include: a difficult childhood made tolerable by his mother's (Sally Field) acceptance and support and the friendship he develops with Jenny (Robin Wright); a successful college football career; commendable service in Vietnam and an excellent career as the owner of various businesses.  Forrest's life brought him in contact with the most renowned historical figures of his time and lead him to experience the full range of human emotions.

"Because Forrest is a pure and simple individual without any opinions or politics," says Director Robert Semeckis, "he can travel through a tapestry of American images spanning three decades, reflecting back the mayhem and madness of what's going on around him."  It is this new, wide-eyed perspective on historical events that will capture the viewer.

Tom Hanks was superb as Forrest Gump.  His portrayal was so authentic that I didn't think of Tom Hanks at all -- only his lovable, enchanting character.  Robin Wright is also great as Jenny, Forrest's life-long friend and only love.  Says Wright, "Jenny doesn't see Forrest as different, that's their common bond.  She is someone destined to have a very dark journey through life, yet knowing someone like Forrest sustains her.  He is always there for her and is nothing but honest.  When she is with Forrest, her perspective is restored.  They bring out the best in each other."

Forrest Gump first came to life in the novel of the same name written by Winston Groom.  Critics of the book enjoyed its humor but were unanimous in their enthusiasm for its main character who inspires and attracts the reader despite his many shortcomings.  Wendy Finerman, one of the film's producers, was immediately drawn to Forrest's unconventional heroism.  She says, "I saw an incredibly cinematic story of a man who is inseparable from the events we've all grown up with.  In the same way that children can say the most brilliant things, Forrest Gump is able to bring a rare clarity to what we went through in the 50's, 60's and 70's.  He's a remarkable character who is just as good at making you cry as he is at making you laugh."

This is an excellent film which engages the viewer with its strong emotional content.  I left the theatre feeling as if I had experienced Gump's life along with him.  My only criticism would be the sometimes unbelievable behavior that Gump exhibited.  The humor directed at Gump's naivete didn't always strike me as funny.  As the film progressed though, I feel that the writers presented him in a realistic, humane way.

"There's a little part of Forrest Gump in everyone," says Wendy Finerman.  "No matter how complex things in Forrest's world become, we can all learn from the fact that his greatest happiness comes from his simplicity."