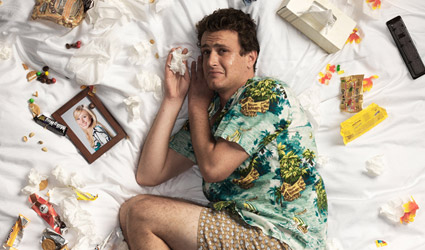 
Filmgoers looking for an uproarious comedy, especially those who loved Knocked Up and Superbad, have another one in Forgetting Sarah Marshall.

Producer Judd Apatow has a way to grab young viewers, and does so with aplomb into the self-pitying guy, touching the inner self, and also the libido.

If Drillbit Taylor was the early years of Superbad, then Forgetting Sarah Marshall is a less smarmy spin on Blake Edwards' 10 or a slightly less outrageous version of There's Something About Mary. This is what the remake of The Heartbreak Kid should have been more like.

Star and scripter Jason Segel is the average, working-class man-child Peter Bretter not really happy with composing music for TV fare like "CSI" for his attractive titular actress girlfriend (Kristen Bell) is co-star.

The underachieving, not so confident, chubby Peter has notions to put a little "Dracula" and "Les Miserables" into his creative visions. The insecure guy, as portrayed by Segel, can go against the grain of a "real man" as he acquiesces to Sarah in many ways, holding true to the fact that love is the foundation of their relationship.

The true nature of the film begins to expose itself long after a towel drops once Sarah leaves Peter for a narcissistically suave British rocker Aldous Snow, a scene-stealing Russell Brand.

The downtrodden Peter tries to perk himself up with a Hawaiian getaway only to find himself in the exact resort where Sarah and her new beau are on vacation.

The script (except for the last act) does well to bring color to all the complications in the variations on chance meetings and misunderstandings from the aforementioned conventional set-up.

Director Nicholas Stoller understands the humanity of such a character like Peter that lets the logic, with a few candid interludes, emerge naturally. The humorous situations often emerge in desperate situations, even when characters become victims of their own wry attempts.

The comely Mila Kunis (remembered for "That 70s Show") registers well as a coquettish hotel clerk who shows Peter a good time during his rather oddly raucous time away from home.

Not as affecting as Knocked Up or finely prurient as Superbad, Forgetting Sarah Marshall has the strength and sensitivity to let it all hang out. The triangle of Peter, Sarah, and Snow is effective enough, though Bell has more of the straight role. And, as part of the Apatow ensemble, Paul Rudd is risible as a surfing instructor, while Jonah Hill puts some spice into his waiter looking to be a star musician.

Segel, Apatow, make it all something comedic and hysterical, not wallowing at all, evening out the class and gender equation.