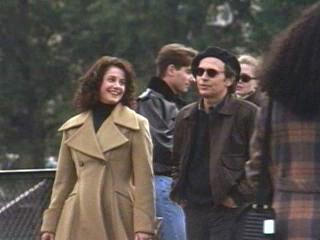 
Billy Crystal co-wrote and directed this comedy about the trials and tribulations of marriage.

Crystal stars as Mickey Gordon, an NBA referee. He's a happy, carefree bachelor who loves his job. He meets Ellen Andrews (Debra Winger),an airline executive when he flies to Paris to bury his father and the airline loses the coffin.

After that bumpy start, they marry and their relationship continues down a rocky path. Ellen and Mickey's story is told through flashbacks and narrated by Mickey's friends.

Joe Mantegna begins by telling his fiance' (Cynthia Stevenson) on the eve of their own marriage, how Mickey and Ellen met and some of their marital problems while they wait for Mickey and Ellen to join them. The story continues as two more couples (Julie Kavner andRichard Massur, John Spencer and Cathy Moriarty)arrive and add their own versions.

The action goes back and forth in the restaurant between Ellen and Mickey's tales of woe, with Stevenson becoming more and more emotional with each new revelation of Mickey and Ellen's turbulent marriage.

They relate how Ellen leaves France to marry Mickey that Mickey leaves his job because Ellen resents his constant traveling, about Ellen's elderly father (William Hickey) moving in with them and their unsuccessful attempt at parenthood. All the while, Stevenson is wondering if going through with her own wedding plans is such a great idea.

Both Mickey and Ellen bring problems to the marriage and neither are willing to give them the attention needed to work them out. That's part of the charm of the script - the characters aren't perfect. They are funny, maddening, silly and real.

Crystal is a very likable actor, and so is Winger. I just don't think there was much chemistry between the two. He's funny (although she has a very comical scene with a pigeon stuck to her head).

The characters are well-developed (even the do-stars are quirky and interesting), the story is entertaining and clever and Crystal it terrific