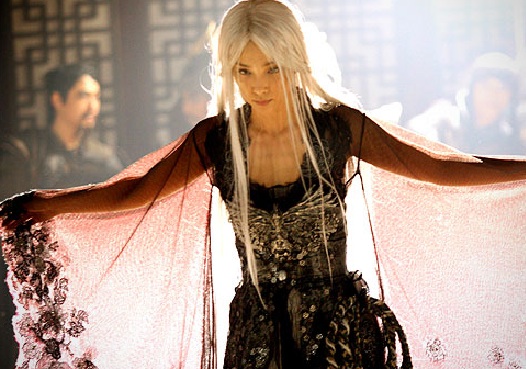 
One had to hope that the historic pairing of Jackie Chan (Rush Hour) and Jet Li (Hero) was going to be quite a martial arts action extravaganza. Unfortunately, The Forbidden Kingdom doesn't really pop out as an adventurous foray into the exotic Far East despite the physical charisma the stars give to it.

Director Rob Minkoff bookends the tale around a Chinatown pawnshop frequented by teen Jason Tripitikas (better in the current low-budget drama Snow Angels). His fascination with a golden, decorative staff in the backroom when not hunting down bootleg kung-fu DVDs becomes his passage to an ancient Chinese farming community.

The story from John Fusco (Hidalgo), who is well versed in Chinese culture and martial arts, works off of a fantasy similar to a Star Wars concept. It turns out the powerful Jade War Lord (Collin Chou) has imprisoned a fabled warrior the Monkey King. His soldiers also have plundered the place where Jason has landed.

Perhaps conjuring up memories of his Drunken Master for some, Chan's Lu Yan unsober bystander helps Jason against some dangerous men. Lu Yan tells the young man his is "the seeker" to fulfill a prophecy to give the Monkey King (Li) back that artifact which is actually his.

The elusive Lu Yan and Jason find an ally in Liu Yifei's Golden Sparrow, a girl who lost her parents to the Monkey King's immortal enemy. Li also shows up as the white-robed Silent Monk, who along with Yan's drunk-fu, provide Jason with the tools needed to succeed and a way to get back living as a teen obsessed with kung-fu movies.

There is an interlude with Chan and Li going at it in a temple which more would have thought the picture would have been like. But, with Minkoff helming, as one remembers The Lion King in his animation days, there isn't any notable variation on the Hong Kong action genre.

Like the aforementioned Hidalgo there is the travails of passing through a desert climate before an encounter with the tough witchy Ni Chang (Li Bing Bing). And, finally back to the present to come mano-a-mano with a bully (Morgan Benoit) different than the kind in Drillbit Taylor.

So, having Chan and Li together for much of the time doesn't prove to be that great, even though their physical skills have hardly diminished. The CGI effects are there to savor, at least for some as well as decent fight choreography by Woo-Ping Yuen. But, the best of the production with fine costuming and designs comes from Peter Pau to cinematically shine China in a lustrous light.