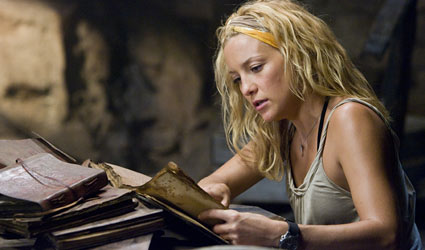 
Whenever I see a really bad movie, I think; "Don't the filmmakers see what I'm seeing?" Can't they fix it by cutting a little, tweaking the action, re-working the dialogue or anything to make it better? Iin this case, I guess not!

Finn, played by handsome Matthew McConaughey and Tess, played by the equally adorable Kate Hudson, are two newly divorced treasure hunters. She has moved on with her life and is working as a steward on millionaire Nigle Honeycutt's (Donald Sutherland) yacht. Finn, ever the irresponsible daydreamer, is still chasing after lost treasure.

He tries to persuade her to help find a sunken treasure from the 1700's Spanish Queen's Dowry. But, because he's also broke, doesn't own any equipment, not even a boat, he also wants her boss Nigel to fund the escapade.

He tries to get them excited enough to join him by telling them the most convoluted, boring history of where the treasure started out and where he thinks it ended up beneath the ocean. Even so, Tess and Nigel join on.

There isn't a clear path to the treasure however, as Finn has some unfinished business with a few men on the nearby island. He owes one a lot of money and the other is a rival hunter, both want to do Finn bodily harm.

The premise is pretty good. Take two terrific looking, buff actors and put them in a beautiful setting in an action/comedy involving diving for hidden treasure. Sort of like Nick Nolte's The Deep with Jacqueline Bisset, but this one is to be funny.

But funny never happens. Fool's Gold never gets off the ground and into the water. There's nothing funny going on, unless we think it's comical watching McConaughey beaten and blown up every few minutes. And the long time it takes before any actual treasure hunting takes place slows things down to a crawl.