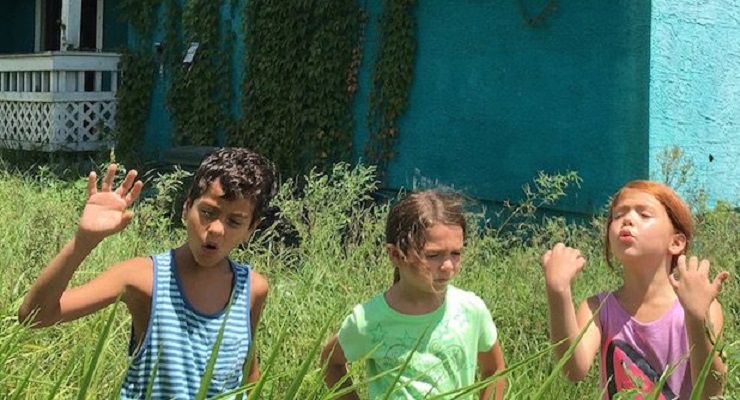 
Sean Baker looks at the underbelly of the American Dream from the shadow of Disney World with a singular bracing wit, as well as wrenching humanity.

The maker of a controversial, if poignant Tangerine performs raw, naturalistic marvels with a documentary realism in The Florida Project using flourishes of digital technology to complement shooting on 35 mm. Some dazzling illuminating rainbow sights reflect a youthful, rambunctious passion from director of photography Alexis Zabe.

Off of Rt. 192 there is a six-year-old Moonie (Brooklynn Prince) who lives in a pink motel - Magic Castle - with her desperate, irresponsible mom Hallee (Bria Vinaite). She has misadventures with her friends as played by Valeria Cotto and Christopher Rivera, whether at an abandoned house, spitting and accosting tourists for ice cream money. It doesn't bode well with motel manager Bobby (a subtly effective Willem Dafoe) who is rather lenient.

A childhood innocence and joyous abandon is prevalent even from Zabe's camera, often topping off from the height of the youngsters, juxtaposed with the faux happy tourist subculture. A destitute, submissive environment for the parents expresses the complicated existence where panhandling, prostitution and theft are means to evading eviction. But, the welfare-like mother does what she can to shelter her from a remorseless, unforgiving world.

The title derives from the early planning stages of the imaginative pioneer Walt Disney as other motels on the fringes include Future Land and Ali Baba. They are like housing projects for the kids to display some wild exuberance (that may have some reaching for pain relievers) as well as traversing the grassy swamp locales when not running up and down stairs or across balconies. A sequence involving Moonie and a client of Hallee is so well-done in terms of what's left in (and out of) frame that really keeps one fully invested and caring about what's at stake.

Yet, in spite of how smug and recurrent Florida can be at times, Baker makes this Project something to behold and very near and dear. It really is an oddly mesmeric experience primarily because of the spontaneous ways Moonie and her friends display emotions (Prince, in particular, is deft in her range and ability to turn on them). Dafoe amazingly embraces the intent of this millennial Little Rascals in a role that really manifests an effortless handling of his craft. Vinaite, meanwhile, spotted from Instagram in her first screen turn, has quite a spitfire presence as Hallee gets behind the eight-ball to inevitably face the consequences with her daughter.

Yet, in this fictionalized if unsettling and carefree milieu there is the sense that there can be change. And, finally at the actual central original stomping ground of the Orlando resort, a kingdom magically resonates.