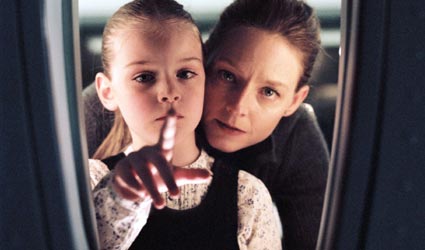 
Jodie Foster might look fragile, but don't be deceived, she can handle herself in a pinch. As she demonstrated in Panic Room, she's a driven woman when it comes to protecting her child.

Her husband jumps (she believes he accidentally fell) off a roof and she and Julia accompany his body to the US on the plane that Kyle helped design.

Mom falls asleep during the flight and she wakes to find Julia missing. At first, she believes the little girl might be hiding on the huge, multileveled aircraft, but soon she alerts the crew that everyone needs to search for the little girl.

The Captain (Sean Bean) is called out of the cockpit, he tells the passengers to stay in their seats while the crew looks in every cubby hole, bathroom and baggage compartment. When they can't find the daughter, Kyle becomes more frantic and shrill as the passengers and crew start to believe she's having a nervous breakdown and Julia might never have been on the plane.

The success of this terrific thriller is due a great deal to Jodie Foster's performance. She's wonderfully expressive and when she's frightened or overwhelmed, the veins in her neck become taut, her face muscles tense up and her entire body is involved in the tension.

The setting is also a major part of the story. We go into the very bowels of the plane and although it is a huge craft, it seems to close in and become almost suffocating as each compartment comes up empty.

The part was originally written for a male and when Foster read it, she asked for the role to be reworked so she could play Kyle. Director Robert Schwentke made the right decision in choosing her, she brings strength, determination and a mother's love to the role.