Flags of our Fathers 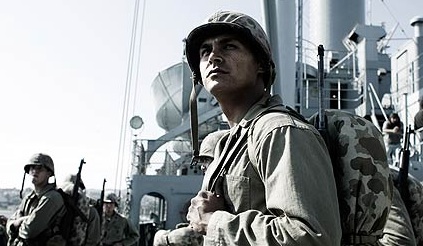 
Clint Eastwood's first of two war pictures working from the Battle of Iwo Jima pointedly explores the nature of heroism.

In Flags of our Fathers, from the best-selling novel written in part by the son of one of the central characters, something harrowing comes from a 35 day conflict as Eastwood serves as a producer in collaboration with Steven Spielberg.

Using a washed-out canvas as his palette for an often out-of-sequence recounting, Eastwood focuses on medic John Bradley (Ryan Phillippe), Ira Hayes (Adam Beach), and Rene Gagnon (Jesse Bradford). They were half of the soldiers who supposedly took part in Joe Rosenthal's indelible AP photo "Raising the Flag on Iwo Jima." And, the ones who survived the brutality, at least, not throughout the entire battle, to participate in a tour to sell War Bonds because America is unable to cover the cost for the military to be able to win WW II.

From the screenplay by William Broyles Jr. and Paul Haggis (The Last Kiss), the emphasis here is on the effect Iwo Jima has had on the three, especially Bradley and Hayes. They realize the public needs to feel good about bravery and hope from this iconic shot without anyone clearly identifiable. The real heroes whom they all stress were lost on that ghastly battlefield.

With Spielberg as a producer and the massive invasion to capture Mt. Surabachi, this drama would seem to have a lot in common with Saving Private Ryan. But, Eastwood is more of a lyrical visual stylish, and he isn't trying to rival the opening of that Tom Hanks film when Normandy beach was covered with thousands of bodies.

Flags of our Fathers deepens in the cynicism about idolizing those who fight for their country and putting meaning into "the right picture can win or lose a war." The cohesiveness from the homefront and the visions of the war weary in the Pacific isn't as stunning or richly satisfying as the presentation.

While the focus is more on the Phillippe character, as Bradley's son tries to write what his ailing estranged dad never explained to him, the Native American soldier Hayes is the most intriguing. Beach, who held his own opposite Nicolas Cage in John Woo's Windtalkers, has the most range to convey, as Ira is often emotional and in a stupor as he is pushed into the sales drive and to pose with his colleagues in places like Soldier Field to simulate the how the flag was raised. The emotional core is built around the bond between Bradley and Hayes, who was talked to by many higher-ups in bigoted fashion (by today's standards).

The affecting dolefulness can be absorbing from the convoluted nature of recreating the ghastly battle and the aftermath on these three. The director himself composed the spare score to the desired effect even if the narration in the late going seems redundant. Thematically, there are connections with some of Eastwood's past successes, including The Bridges of Madison County and Unforgiven. Yet, how it all unfolds from the that reflective imagey is sincere and fleetingly poignant, but never dynamic or immediate. If only Fathers had been as compelling as its closing credits with lots of photos from Iwo Jima its flags would have flown higher.