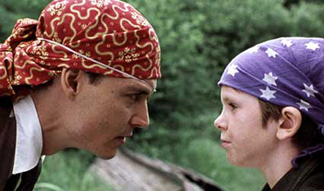 Actor Johnny Depp and director Marc Forster (Monster’s Ball) drive a creative and touching whimsy in the wonderfully crafted Finding Neverland, with a screenplay by David Magee adapted from the play, “The Man Who Would Be Peter Pan.”

One of those based on true events tales figures into the mind behind one of the most appealing literary figures, Peter Pan.

The versatile Depp (Pirates of the Caribbean) stars as playwright James Barrie in 1903 London he meets the young widow Sylvia (Kate Winslet of Eternal Sunshine of the Spotless Mind) while strolling his dog and that turns out to be an opportunity for him.

Her four boys, Jack, Michael, Peter and eldest George, sons of one Llewlyn Davies, ignite a child-like ardor in Barrie. He’ll develop the famous tale for the stage remade quite well by Hollywood last Christmas that led to some backdating for this film which has an innocence and emotional lift to it. Barrie’s inspiration will start new relationships and strain his marriage before culminating in its premiere.

There’s imagination in the role-playing scenarios and a simmering youthful passion that takes gentle, amusing stabs at “Peter Pan. Depp creates a full-bodied character to reveal the boy beneath a dapper, somewhat shadowy man. But, he has that charisma that helps make Finding Neverland accessible to young and old, even when parading as a pirate. At times, it almost doesn’t seem like a period film as it cleverly moves in and out of fantasy.

Much of the dramatic feel comes from Sylvia and Winslet embodies much spirit to keep the tone from being less celebratory. And Radha Mitchell (Man on Fire) and the venerable Julie Christie register nicely as Barrie’s melancholy wife Mary and Sylvia’s bossy mother, both of high society. A strong impression comes from young Freddie Highmore as Peter who has much rapport with Depp. He looks like a small child, but seems a lot more grown-up, just the opposite of his namesake.

Amid a scandalous development that has some characters reacting like those today, Forster and cogent scripter Magee are compassionate to everyone influenced by the power of imagination. The production exudes an organic elegance to it, appearing less meticulous in filming that it probably is. Thus, an endearingly artful look from Barrie’s vision is a holiday season find which we all can delight in.