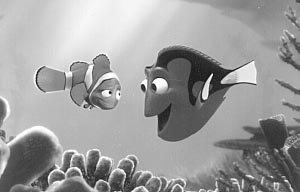 Disney/Pixar Studios have created a fabulously entertaining animated adventure that takes place in the sea off the East coast of Australia.

In water so vibrant, the colors pop off the screen, lives young Nemo, an orange and white striped clown fish, and his dad Marlin.

It's Nemo's first day of school and over-protective dad (voiced by Albert Brooks, who is perfect as the jittery, overly nervous Marlin) is trying to keep his little son safe from the many dangers that lurk in the deep.  But, as any other energetic, curious youngster, Nemo (voiced by nine year old Alexander Gould - "Ally McBeal") wants to explore on his own.

In a fit of defiance, Nemo goes where he's not supposed to, and is picked up by a skin-diving Dentist as a trophy for his Sydney-based aquarium.  Dad watches in horror as his son is taken to who knows where, and for the remainder of the film, he does everything within his power to find his beloved Nemo.

Along the way, Marlin meets up with Dory, an upbeat and good-natured blue tang fish (voiced by Ellen DeGeneres).  Dory wants to be helpful, but unfortunately she has short-term memory loss.  DeGeneres adds a sweet, vulnerable quality that is perfect for the cheerful Dory.

The screenplay by Bob Paterson, David Reynolds and Director Andrew Stanton, has worrywart Marlin withstanding countless dangers (similar to those same dangers that he warned his son to stay away from).

Marlin and Dory deal with an encounter with three sharks in a funny scene involving group therapy, a rough and tumble trip over the Australian Great Barrier Reef and a scary ride through a wall of pink jelly fish.  Some adventure!

The film is filled with a number of different and colorful sea creatures, but my favorite was "Cruch," a large 150 year old sea turtle who speaks California surfer lingo-Dude.

Besides the spectacular three-dimensional computer generated animation, the story is sweet, funny and involving for young and old alike.  One of the reasons it's so interesting is that the characters all have different personalities.  Some are meek, some courageous, some are talkative and funny, and others are shy, but all are very appealing.

Finding Nemo is sure to amuse and entertain.  It's an adventure that will keep the attention of kids because the action is continual.  It's truly a technical and visual wonder that I thoroughly enjoyed.