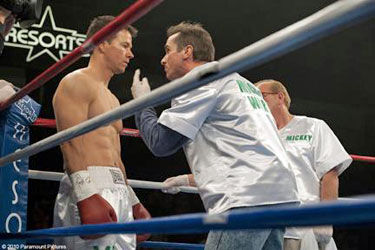 
There's enough domestic commotion to go around in this gratifying, commercial, but low-budgeted boxing drama. One that could yield some Academy-Award consideration, especially in the Supporting Actor categories.

The protracted gestation period for The Fighter, set in Lowell, Massachusetts in 1993, has maybe left the final product a little beaten up and ragged, especially in the narrative department.

It's hard not to get behind producer and star Mark Wahlberg (in his second sports-related foray after the inviting Invincible and also part of a similarly large brood) as Irish welterweight pugilist Micky Ward before he would have a comeback (similar to Rocky) in the '90s. Wahlberg salvaged the project with personal pride to get the filmmakers and actors he wanted with the likes of Brad Pitt and Darren Aronofsky earlier connected to it.

Yet, a diffuse, strained, and edgy working-class account based on Ward's life builds notable gravity from the relationship with Micky's messed-up family, especially his half-brother Dicky Eklund, evinced with impassioned charisma by Christian Bale. Director David O. Russell stresses the complications in such a clan with emotional turbulence that draws onlookers even as the story bobs and weaves to the ring and training sessions.

The film's ideology recognizes the dysfunctionality in which the teacher can often be a foe or scrapped with in order to not only attain something of a long-shot, but reignite humanity within increasingly frail relations. Micky and Dicky have a septet of strange sisters, a couple of which have their own nicknames.

Micky is known for his voracious left hook, but consistently takes a beating in the squared circle. A gaunt Dicky, who once had his moment of glory (a knockdown) before bowing to Sugar Ray Leonard, is now struggling to get by, addicted to crack cocaine. So, now Lowell's pride is in Micky's corner with flamboyant, extremely imperious mother Alice, a mighty Melissa Leo, managing the hard-strapping tenderfoot.

The jabbing, if vibrantly familiar storyline pits Micky's new barmaid girlfriend Charlene, a pretty tough, sassy Amy Adams against and, later, with the troubled trainer in Dicky, Alice and the rest of the clan.

Redemption comes through a difficult, challenging pursuit as rendered by Russell (in his third collaboration with Wahlberg, the first being the terrific Three Kings) with noticeable gritty, wry ardor as Ward strings together an unlikely path on the way to a championship. Ward was known for luring his opponents into having a decisive edge on him with an unbelievably high tolerance for pain, only to strike back with a signature, often knockout blow. The filmmaking extends its rousing, unsentimental pull with some adroit, restive editing with a documentary realism, especially in TV-styled bout coverage.

Still, this mostly taut, if ultimately predictable yarn which has a strong sense of place (not unlike what Ben Affleck did so well in the Boston suburb of Charlestown in The Town), an honorable acquittal (and limited biopic) of Ward hits hardest in its indefatigable fidelity towards family. The Fighter (like Eklund) seems to understand its own demons and setbacks, enough to be a successful word-of-mouth holiday present, especially with memorably scary kinetics offered up from Bale and Leo.