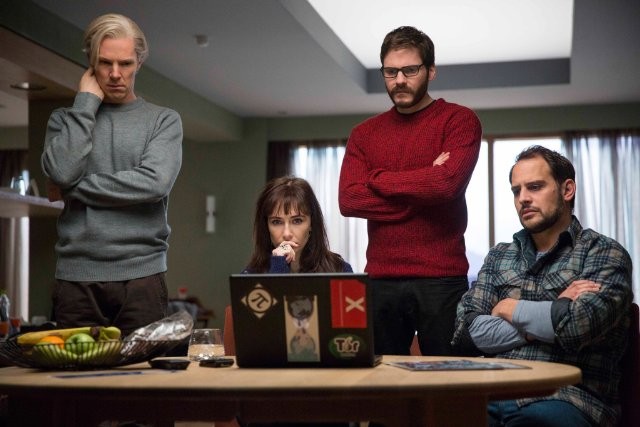 
Most people have an opinion about Australian-born Julian Assange, who hacked into U.S. Government computers and under the name of WikiLeaks, released hundreds of thousands of secret documents to the New York Times and The Guardian newspaper.

He's considered either a moral man and First Amendment champion or an egotistical criminal.    Publishers struggled with the fact that by releasing classified information, it would affect U.S. national security and in some cases could risk lives.

Benedict Cumberbatch plays Assange as a rude, driven man with piercing eyes.   Along with his collaborator, Daniel Domscheit-Berg (Daniel Bruhl), they shake up things big time with their release of U.S. military Iraq War documents in 2010.  The men travel around the world, hiding out in hotels and sleeping on sofas while they expose secrets to the world.

Director Bill Condon uses split screens and jittery camera work to add to the growing tense situation -- he had to do something because how interesting is it to watch two men wrapped up with cables and computers, after all.

Assange is currently hiding out in an Ecuadorean embassy in London.   He's fighting extradition for possible prosecution.   Its ironic that the man responsible for taking on big banks, governments and countries doesn't really have a country to call his own.