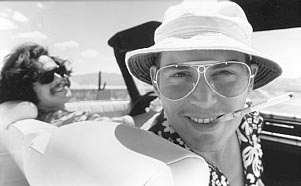 Fear and Loathing in Las Vegas

If the 50s were safe and conservative, the 60s were about rebellion and a changing of the political guard and the 70s were the hollow result of the conflicts in society and the resulting drug overdoses that occurred.

The fear which is at the heart of Hunter S. Thompson's book is splashed on the screen by director Terry Gilliam as if directed by the crazed white rabbit from Alice in Wonderland.  The characters are running scared and filled with loathing for everything to the extent that the only comfort is found in the constant use of drugs.

The use of special effects enhances the sense that the floor is moving and twisting and that the crowd in a bar turns from human to lizard patrons.  The action is incredibly fast and furious but it is equally repetitive to the extent it becomes passive and loathing.  Neither the comedy nor the serious underlying matter dominates.  Only the symptoms are on the screen, not the disease.

Johnny Depp plays Raoul Duke (a.k.a. Hunter S. Thompson) and Benicio Del Toro is his advisor, Dr. Gonzo.  The two travel to Las Vegas to cover a motorcorss event.  Long before they reach Vegas, they are stoned; neither one spends any sober time during their entire visit.

If the underlying cause of their depression and drug use is based on the events of 1971, it is unclear.  A sense of reason for the aberrant behavior would provide a far more concrete foundation for the two lost souls roaming the desert city using the cover story of reporting on dirt bikes.

Purpose would have given reason to the unreasonable, irreverent actions taken by Duke and Gonzo.