The Fast and the Furious 3: Tokyo Drift 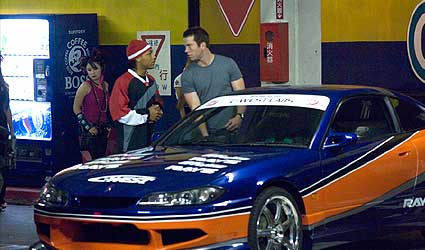 
Now in the third film of the series, we find ourselves as the title suggest in Tokyo. How we get there is a little too simple.

The story opens with a classic outsider's tail of a high school jock and popular guy racing the loner outsider with an attitude. Mayhem follows as the two race through a housing development under construction destroying houses and cars along the way. While the chase and race is a nice intro, the film goes total formula from there.

Next we find our lead character Sean Boswell (Lucas Black) in court and about to go to jail until his mother decides to ship him off to his father in Tokyo. Seems young Sean has a problem with racing, he can't stop.

Arriving in Tokyo, Sean gets the "stay away from cars" lecture from his Navy officer father. You know this can't happen and soon he is introduced to the "sport" of drift racing by a classmate named Twinkie (played by the not so lil Bow Wow).

Soon we have a conflict between Sean and the popular DK, short for Drift King, played by Brian Tee. After much verbal banter a race is set and a car provided to Sean by a quasi-outlaw and mob connected Han (Sung Kang) which is returned in many pieces.

After losing the race Sean is forced to work off his debt by being a driver and runner for Han. Seems Han has a game of his own running here and Sean is his tool to get DK to lose control. Add to this Sean making plays for DK's girl Neela (Nathalie Kelley) and we have the formula for a grudge match and a race for the girl.

This is not a film to think about, just sit back and have fun watching the chase and race scenes, they are what this film is about.