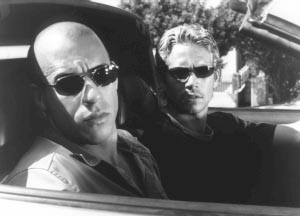 The Fast and the Furious

Honestly though, The Fast and the Furious is almost funny though that was not its intention.  The script faults and direction will make you chuckle when it's not funny.  You will actually feel uncomfortable due to the plot holes that are big enough to drive a tractor trailer through and the dialog is even worse combined with the abysmal acting.

Staring Jordana Brewster, Matt Schulze, Vin Diesel, Paul Walker, Michael Rodriguez and Rick Yune, the film revolves around a police officer trying to solve a group of hijackings by infiltrating a gang of street racers.  As there is nothing to ruin by telling the whole story and nothing to gain either, we'll just hit the high points.

The undercover cop manages to get into the street racers confidence and, much to his dismay, falls for the gang leader's sister.  Problem here is that there is no on screen chemistry, though everyone is a beautiful person.  There is no one to love, like or hate.

The film meanders to a miserable end by means of creative filming of the races and cars, but never reveals its plot until the very end, leaving you pumped from the hard playing sound track but questioning why you spent your hard earned money on a Yugo disguised as a Porsche.