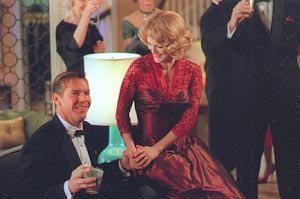 Todd Haynes puts his maverick stylish sensibilities on Douglas Sirk's glossy 50's melodrama in Far From Heaven where he teams up again with acclaimed actress Julianne Moore, known mostly by mainstream audiences for her work in films like The Lost World and Hannibal.

Moore is more than up to the task of working with the director who explores taboos a half century ago affecting gender and race.  The red-haired actress emits a perfected "Donna Reed Show" persona as she expresses much from a woman trying to maintain a happy facade in the midst of a gradual dislocation of a cherish family life.  Her performance emits the strength, stoicism and dignity of Pat Nixon as she supported her husband through his political crises.

Perhaps this wonderfully made film set in Hartford, Connecticut isn't quite as deeply felt with a narrative turn that echoes the anti-Semitism expressed in last year's Focus which starred William H. Macy and Laura Dern.  But, Far From Heaven is subtly tender and un-gratuitously riveting as it benefits strongly from Moore's Cathy Whitaker with the focus on two men figuring in her emotional ride, they are played by Dennis Quaid (The Rookie) and Dennis Haysbert (TV's hit series "24").

Quaid's Frank Whitaker has provided Cathy with a dream home and two beautiful children and an attentive maid (Viola Davis).  He's a local executive for a TV manufacturer and the Whitakers are referred as "Mr. & Mrs. Magnatech."  Frank works long hours so she can look fine for her family and chatty friends.

The safe, pious conditions give way as they move Far From Heaven.  Cathy tries to surprise her husband with a warm meal during a late night and receives one herself when Frank is seen to be different in more than one way.

The marital strain needs medical help with the embarrassed Frank consulting a doctor (James Rebhorn).  But, the problem doesn't just go away and he finds solace in liquor which leads to abuse and further shame.

Cathy then turns to Raymond (Haysbert), a tall, black gardener who is quietly sophisticated and able to answer her declining emotional state.  When her neighbors see Cathy spending more time with him than is fitting, things become more complicated for her and her family.

The problems and resolutions play far more realistically in 2000 than the setting of the 1950's where such emotions would have remained hidden in Connecticut society no matter how strong.

A gradual sensing of tension develops from the performers, especially Moore as her Cathy tries to do what is best for her children.  The triangular quality of characterizations realized by the ambitious director are rooted in isolation and appearances.  The genial Haysbert and conscience-ridden Quaid are part of the tapestry that help Moore make Cathy able to tap into bias and illusions created by her all-American Betty Crocker look.

If the screenplay lacks a finished polish and feels too measured, then Haynes scores with a production that makes Hartford in late autumn of 1957 look worthy to be on the cover of "The Saturday Evening Post."  Films like this from the past "Imitation of Life" and "All That Heaven Allows" make the 50's resonate with lush compositions in photography in unison with designs and wardrobes.  And the score from Elmer Bernstein is harmoniously textured to imagery saturated in color in a telling contrast of the picturesque with imperfect.