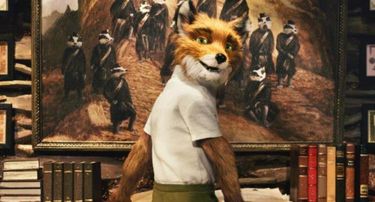 
Wes Anderson does animation quite admirably from a Roald Dahl Britain-based classic, amusingly enough to connect with families, without the darker, surreal ramifications that plagued an imaginative adaptation of Where the Wild Things Are.

Fantastic Mr. Fox features the vocal talents of (a busy) George Clooney, Meryl Streep, Bill Murray, and Jason Schwartzman, and has a goofy fun time with being dysfunctional and off-center in an antiquated, timeless way.

Things are, well, fantastic, for Clooney's Mr. Fox, as a column writer with his spouse (Streep) and sullen teenage-son Ash (Schwartzman) as nephew Kristofferson (Eric Anderson) comes to his quaint below-ground den. The sly Fox looks to relocate his family to a tree which invites a return to snatching chickens.

The director and Noah Baumbach are the scribes who devise what becomes arguably engaging as the clay-mation winning Chicken Run. Kylie (Wally Wolodarsky) is Fox's possum friendly accomplice who rile up local farmers like an irate Bean (Michael Gambon). They're out to get the local troublemakers, not just Fox and his kin.

Anderson isn't going for any big statement here, faithful to the antecedent about embracing one's less domesticated side. He trusts his quirky instincts in making a spry comedy with sharp, witty dialogue through interpersonal relations and angst. Tensile strength is provided by the animators in jerky, coarse-grained stop-motion mode, visually air-brushed in orangey-yellow to help make the the emotions of an energetic cast more vibrant and snappy than expected.

With the central characters decidedly from the U.S. in spite of its main setting and human counterparts, it's obvious where the studio would like to take a larger bite out of the box-office.

In its straight-on deliberation, Fantastic Mr. Fox hones into its themes with some deeper bite for those who were into other more adult fare by the filmmaker like Rushmore and The Royal Tenebaums while not really compromising the intent of Dahl. It enlightens its community with spirit, as Clooney, Streep, and others like Brian Cox, Willem Dafoe, and Owen Wilson can attest to, with a focus beyond outwitting and outlasting a formidable adversary.