Fantastic Beasts and Where to Find Them 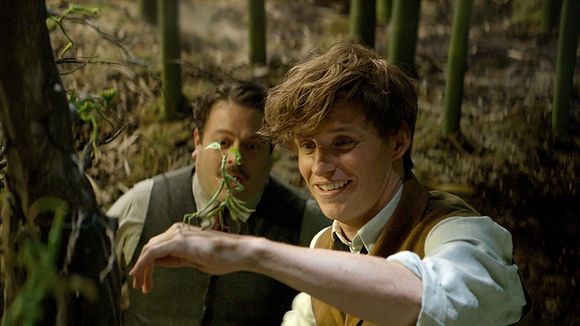 
Before Harry Potter, Newt Scamander, played with innocence and determination by Eddie Redmayne arrived in New York City in 1926 following a world wide adventure in which he collected a series of magical creatures which are magically hidden in has suitcase.  It doesn't take long for a Niffler to escape from his suit case.  A mix up follows with a "No-maj" (American Muggle), (ordinary people) Jacob Kowalski (Dab Fogler) when Newt act to eliminate Jacob's memory of the events Jacob escapes and that causes problems through out the film because Newt has a suitcase full of doughnuts and Jacob has the magical creatures in his.

Magical creatures escape and cause havoc throughout the city.  That makes a perfect opening for gigantic special effects depicting buildings falling, bridges collapsing and towers tumbling down on the streets.  It also allows director David Yates to showcase an image of 1926 NYC filled with classic cars and a standard set of building designs which existed at that time.  He even creates the headquarters of the USA Wizards which looks like a modern  Hyatt  hotel, open in the middle but with 1926 designs.  The atmosphere which is set is quite perfect to draw us into the time period of the story.

There is a side story about a young child who has unmeasured power and a group who sing songs about dead witches.  At the same time Newt begins to disappear into his suit case and takes Jacob along with him.  Magical beasts are revealed ranging to a giant eagle like bird, to a duckbilled platypus like character, the Niffler, who loves to steal jewels.  Much of the time the main characters spend effort attempting to recapture the escaped beasts.  Within all of this is the commanding rule that non Wizards can not be allowed to know about the Wizard world which exists right under their noses.

It is interesting that Jacob the muggle may be the main character in that he constantly asks questions which we would ask, and so he becomes the voice of the audience and through what he learns we are able to piece together the story in the script.  He is also comical to watch as is Alison Sudol as Queenie a wizard who find him a very decent human being but is bared from any relationship with a muggle.  Joh Voight is Henry Shaw, Sr. a newspaper owner who exercises power and has a son who is a U.S. senator he is not above taking alliances with some dark forces.  Ron Perlman is a goblin gangster who owns a speakeasy nightclub and is an effective character to watch.

The film is fun to watch, but it will take some patience to sort out all the beasts and characters that become part of the story. Overall this is a quality piece of work and in the end "It is time to make the doughnuts" a function which speaks to the success of Newt in his American visit.