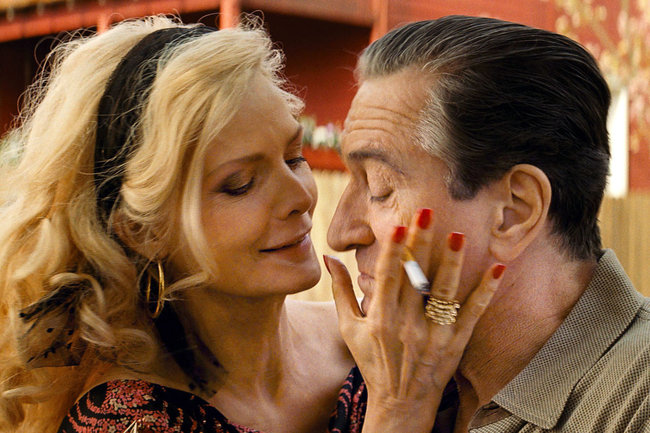 
In director Luc Besson's comedy/drama, Robert DeNiro plays Giovanni Manzoni, an American mafia boss in the Witness Protection Program because he snitched on his fellow mobsters.   Some of them are in prison, but they have their own special way to hunt him and his family down and make him pay.

Hiding out with his wife Maggie (Michelle Pfeiffer, in one of her best performances), and teenage children Belle (Dianna Agron) and Warren (John D'Leo) in a small French village, they try to look like a normal American family on holiday.   The only problem with the Manzoni family is that each and every one of them is bonkers.  Dad kills anyone who ticks him off, mom blows buildings up, Warren blackmails other students so he can share in their drug trade and lovely Belle loses her temper frequently and resorts to beating people to a pulp with any object she gets her hands on -- tennis anyone?

Tommy Lee Jones plays the exasperated FBI agent in charge of keeping them safe.   He finds it a difficult task however, because instead of keeping a low profile so that the killers can't find them, they draw attention to themselves with their absurd actions.

The comedy is disrupted by violence at every turn.   In the middle of a humorous scene, a totally unexpected violent act is thrown in, keeping you off guard.

The film is well cast and even though DeNiro can play a bad guy in his sleep, he's also very good with the lighter side of his character.   I liked the storyline and the acting overall is great, but I could have done without some of the unending violence.