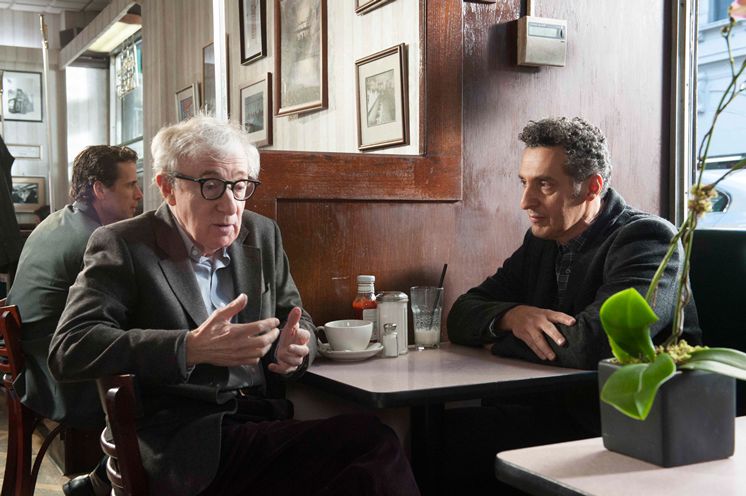 
John Turturro and Woody Allen provide some amusing banter in what may be considered an uneven, meandering, even off-putting dramatic comedy.

The former directs, writes and stars in Fading Gigolo and the latter who probably influenced the script has an edgy, spry demeanor that makes for his funniest role in years.

Turturro's familiarity with the Brooklyn setting (in realizing an Allen aura where his craftsman make good use of them) in part help makes the tenuous premise of an unsuccessful septuagenarian book dealer with much familial pressures, Murray Schwartz (Allen), retaining his occasional middle-aged florist friend Fioravante (Turturro) as a lover.

In the earlygoing Fiorvante reluctantly becomes a partner with Murray after his impression on his rich dermatologist Dr. Parker, a pragmatic Sharon Stone when solicitation with her and her curvaceous friend (Sofia Vergara).

The tenderness in this presumably preposterous cinematic juggling act comes in the contact of the sensitive and hardly brash Fiorvante with new fragile lonely Hasidic widow client Avigal, a thoughtful, touching Vanessa Paradis after Murray gets his children de-loused.

A longing is rekindled that is mutually felt from a little massage therapy eventually stirs up things in her stern, tight-knit community especially in an infatuated neighborhood-watch man Dovi, a realistically puzzled Liev Schreiber. The result takes the blustering pimp and his good-natured attorney (Bob Balaban) before unyielding, memorable rabbis in a courtroom sequence that really isn't contrived at all.

Even if it's clear that after doing his fifth film Turturro isn't in Allen's league (especially when it comes to honing narrative strands) they're coupling with a softness conveyed by Fioravante has more credibility than some may care to admit. From the touch and deftness to get the heart and soul from the lascivious is complemented by easy-listening music and score that with thematic concerns about unfulfilled unhappy milieus turns out to keep this Gigolo from fading away.