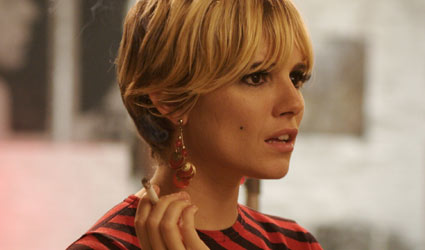 
The renowned ambiance of pop artist Andy Warhol comes across again in the well-acted, but mostly underwhelming Factory Girl.

Starring Sienna Miller, George Hickenlooper's picture has her Edie Sedgwick finding happiness for a period with Warhol's crowd and a singer named Billy Quinn (Hayden Christensen of Shattered Glass). Quinn could be a composite of Bob Dylan, Jim Morrison, and Mick Jaeger.

The title role is riveting played by the blonde, short-coiffed British actress in a screenplay that schematically shows the rise and fall of a dreaming debutante - think of Paris Hilton without all the money. It takes one on the inside of the music and art scene of the sixties similar to what Wonderland did for John Holmes in the adult entertainment industry. One can tell that to get the desired, manageable running time the editing makes the filmmaking look less coherent than it should be.

As Warhol, an unrecognizable Guy Pearce (The Proposition) is the epitome of icy ego, who would act like a child as Sedgwick drifted to Billy. It's played with a sense of honest normalcy that helps give Miller the chance to make Edie's plight more tragic with alcohol and drugs figuring in her personal abyss.

The fracturing of the relations come across in this somewhat vulgar, lascivious melange which includes interviews with people in Edie's life, that is Hickenlooper's forte, as Christensen's forced performance comes across more peculiar than a bold representation of a music icon.

Still, for the credible attempt to evoke the hedonistic, eclectic Factory milieu and the interplay of Pearce and Miller, effectively building on her resume of the likes Alfie and Layer Cake, this Girl has more charisma and altruism than the real Edie.