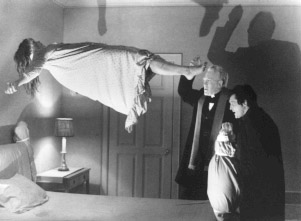 For those who want the visceral horrors of The Exorcist to jump back through their spine, William Friedkin's 1973 Christmas release is on the prowl gaining a wide release to frighten another generation of film goers who've never been shocked like this before.

The ghastly and grisly sights digitally remastered with a new surround sound mix include the memorable scenes of head twisting, pea vomit and probing crucifix.  It's part of a film that projected blasphemy, though it was embraced by the Catholic Church for its intentions.  The titular Father Merrin (Max Von Sydow) is first seen observing a demonic sculpture whose bite is foreshadowed through the satanic cries of music.

Never again achieving the heights she did as the 12 year old Regan, Linda Blair personifies the sick preteen who enacts a vengeance rarely seen on celluloid, though mimicked in so many other horror films.  Her debut in Friedkin's underground Hollywood film has Regan in the doctor's office longer in this version, as the chills and gruesomeness exhibit the power of William Peter Blatty's screenplay.

The chimes of the tubular bells are a new, crude, even lewd way to conjure up Lucifer in all of his frenzied glory.

The Exorcist builds masterfully on its gravity as the harsh language and images take the film to its finale which is a stylist, spontaneous signature.

What really erupts in this millennium reissue is the infamous spider walk scene, Regan's quick mobility backwards on her feet and hands.

With all of its freakiness and expunging activity intoned in its religious rights, Ellen Burstyn's performance more than ably fits the bill as an atheistic mother who makes us feel the terrorizing torment going on around her.  It goes unsaid that Blair had to go through hell in many ways as a hideous pre-adolescent Lolita.  Lee J. Cobb is effective as the duped Detective Kinderman and Jason Miller makes Father Karras highly credible as The Exorcist.

Today, the devil comes on screen in many different dark and gross visions.  But Blair's terrifying Regan, stabs you with an unnatural shocking point that the current slasher/special effects haven't been able to do.