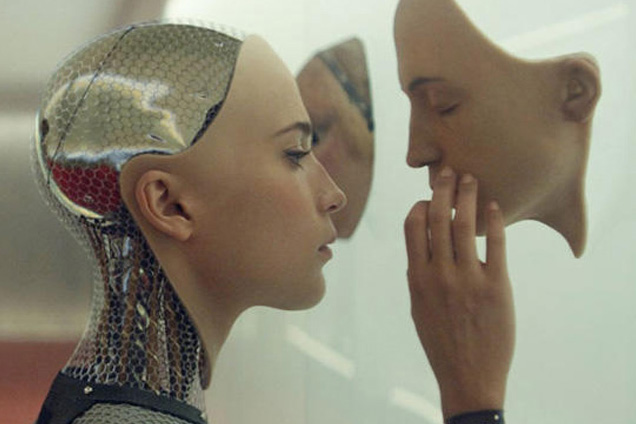 
Ex Machina is a quiet science fiction film, at least from the physical point of view.  But the emotional and cerebral aspects of this exploration of creation holds us tightly in a gripping tale of artificial intelligence.

When Caleb (Domhnall Gleeson) finds himself the winner of a not too clear selection to spend time with Nathan (Oscar Isaac) the reclusive CEO of his parent company he lands in a stunning location in Alaska with deep blue streams flowing from permanent ice and spectacular wooded land the atmosphere suggests a calm intellectual interlude with a man he believes is a powerful genius.  However his assignment is to give Ava what appears to be the Turning Test (remember it from The Imitation Game).  It is after all an ultimate IA test.  This is not very different the The Outer Limits episode "Valerie 23" but far more caucus, detailed and encompassing.

I probably would have called the film "Eva" after the artificial being Caleb is to interact with and test to determine if she is ready for prime time.  How much she has learned and will continue to learn as an artificial being also reminds us of Pinocchio and perhaps Data from Star Trek The Next Generation.   In their sessions which are generally held with a glass wall between the two he learns more about her and she about him.  It is all set under the control of Nathan who watches each reaction from well placed cameras.  The only time the two can be completely candid is when the cameras stop due to a power limit.  We learn after a time that she is not the first but in a line of AI women Nathan has built before her and each is more effective than the preceding one.  Everyone holds secrets in this script.

Ava is physically half complete, her legs, arms and trunk are transparent and we can see her mechanical moving parts but her face is complete with expressions and her mind works very well.  From time to time she dresses with clothing and looks like any attractive young woman. Eventually we see her with her skin on and no clothing looking very fetching to Caleb, but if we remember this is a mind game, the inner  view we first see is what she is made of.  Caleb forgets and is seduced like a nerd by a Playboy Bunny.

This is not a standard script even when we remember past work that deals with playing God. What is going in the minds of the two men and Ava drives this slow moving quiescent film that moves at the speed of scientific research, but non-the-less has a powerful punch in both philosophy and visual effect.

The climax might be predictable but it can't help but catch us as it unfolds and we recognize this is spectacular quality science fiction.