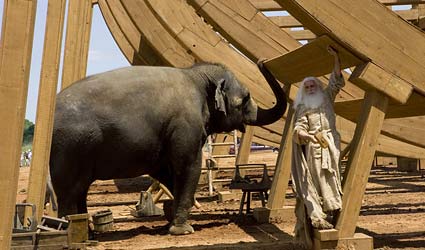 
Steve Carell takes over from Bruce Almighty star Jim Carrey and as Evan, he turns the comedy in a different direction.

The film is more family-friendly this time around, and at times, is quite moving. Evan is a Buffalo news anchor who becomes a U.S. Congressman. His moves his wife (Lauren Graham - "The Gilmore Girls") along with his three sons to a large home near Washington, D.C. as he gets ready to start his new job.

But, before he becomes familiar with a new office, God (Morgan Freeman) appears to Evan and tells him to build an ark in the vacant lot next door. The lot that he mysteriously now owns.

Although he resists at first, everything points him to the task at hand, lumber is dropped off without being ordered, his hair and beard grow repeatedly, directly after being cut and shaved. It is something like Tim Allen in the Santa Clause series. Of course animals and birds (two of each kind of course) follow him everywhere. The pigeons become the most intimate pests.

A one-time workaholic, Evan finally finds something he and his boys can do together, and as primitive tools and equipment show up on his lawn, they work on building the ark before the flood comes.

Helping out in the comedy department is wise-cracking Wanda Sykes as Evan's office manager and John Goodman as a powerful Congressman.

Carell is less physical here than his predecessor and his regular, nice guyness makes him easier to like than Carrey's Bruce.

When the big climax arrives, the special effects are really quite effective and they give us the feeling of being on a giant water park ride.

Kids will love the cute animals and parents should enjoy the dry humor, great cast and PG rating. Finally, a live-action film that the whole family can enjoy.