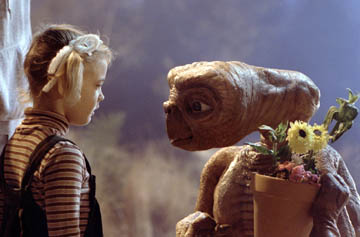 It's hard to believe that 20 years have past since Steven Spielberg's magical film first hit the screen.

The re-release of the 1982 film tells the story of a young California boy who bonds with an inquisitive and gentle extra-terrestrial.  It has had its visual effects polished a bit, but even as seen through these older eyes, it's still a magnificent piece of work.

Elliott, a shy ten year old discovers E.T. hiding in his backyard shed and, after going through a gamut of emotions, finds a friend for life.  I had forgotten how wonderful Henry Thomas (Legend Of the Fall) was in this part.  He's one of the most expressive and impressive young actors and makes us believe that he's experiencing a real adventure.

In fact, all of the children; Thomas, Drew Barrymore as little sister Gertie, and Robert MacNaughton as older brother Michael, act as if they're really a family.  They bicker and talk over each other's lives, call each other names and cover for one another when mom (Dee Wallace Stone - Cujo) is looking for one of them.  They all come together beautifully.

Other than minor changes, E.T. remains his lovable self.  His rubbery face has been fitted with new, more life-like eyes and his movements made less mechanical (especially noticeable when he's being chased through the woods at the beginning of the film).  Also a couple of sequences totaling 2½ minutes have been added.  One new scene has E.T. trying out a bathtub full of water and another has Elliott's mother searching for him on Halloween night.

There are also two changes that Spielberg felt were needed.  One exchanges the word "terrorist" for "hippie" when Michael is contemplating what to dress up as on Halloween, and another has the government agents outfitted with walkie-talkies rather than guns while roaming through the woods looking for E.T.

The spaceship has also been cleaned up and made shinier and the flying bicycles scene was re-shot using live actors instead of fake figures.  That scene was always the most memorable, and the change makes it even better.

To a generation brought up with spectacular special effects, E.T. might appear lacking somewhat, but the thing that keeps this fairy tale fresh is the love story between the boy and an orphaned alien who just wants to go home.

Nominated for nine Academy Awards, and receiving four, Spielberg first thought that his film would appeal only to children.  How wrong could he be!  It is one of the top grossing films of all time and remains an incredible and timeless treat for all ages.