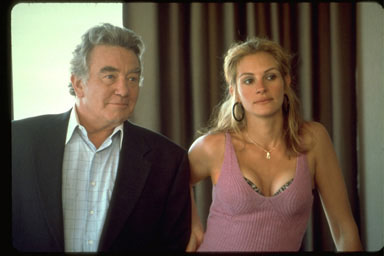 I'm not sure how many millions Julia Roberts can demand for a film these days, but as Erin Brockovich she is pure gold.

Brockovich is a woman who can't keep her mouth shut.  She is irritating, exasperating, troublesome and difficult to deal with.  All of which is her defensive posture.  She insults her colleagues at work, uses every four letter word that has been invented when she feels intimidated and most of the time she feels intimidated.  We can easily understand why she has been divorced twice - no one could live with her.  To make it worst she has driving ambition and total recall.  Her appearance detracts from her credibility; very short skirts and push up bras don't help in board rooms.  They do, however, gain just the right attention from bureaucrats who she must control to get at vital information.

When Brockovich meets up with lawyer Ed Masry (Albert Finney) she demands a job because his law office failed to win an accident suit for her.  Finney is a perfect choice as Masry as Roberts is for Brockovich.  A sixty five year old attorney who is coasting toward retirement takes a chance on Erin as part of his clerical staff.  When she asks if she can follow up on a property transfer case which has medical information in it he agrees.  Brockovich challenges him with her non-conventional dress, determination and willingness to take chances.  Their relationship is constantly volatile; they are very different folks.  The chemistry between the two is vital to the success of the story.  Right to the end he stays in control and has the last card to play, leaving her speechless for the first time in the film.

Brockovich discovers PG&E, a $30 billion company, has released toxic metal into the air over a small town populated with working class folks where nearly all are suffering from serious illness.  The company has offered to purchase the homes of the affected people with the hope that a sufficient amount of time will pass to limit court action against them.  Brockovich pulls samples of contaminated water from streams and dead frogs from wells then convinces over 600 families to join the suit.

Brockovich's life is a lesson in determination, but the most satisfying aspects of the film come when she, Masry and the powerful law firm they join with, win a $333 million settlement for the plaintiffs.  Marg Helgenberger who plays one of the victims, Donna Jensen, symbolizes the real victory which we enjoy at the climax.

Roberts and Finney carry off this David vs. Goliath story perfectly.