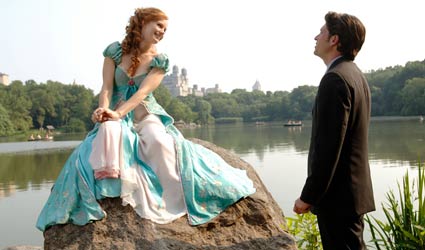 
The animated and live-action worlds collide in the playful, romantic Enchanted with lead actress Amy Adams fun to watch.

Director Kevin Lima (Tarzan) works well off of the Disney fairy tale tradition even if the narrative devised by Bill Kelly (Blast From the Past) doesn't end as sharply as it starts out.

The formulaic, if wacky picture follows Adams' Giselle as she is set to be with desired Prince Edward (James Marsden, very good in Hairspray) in the animated, musical land of Andulasia. Edward's scheming mother, Queen Narissa (Susan Sarandon), has sent her to the grittier environment of the real world, notably the hectic, noisy Times Square.

The shock of a place that doesn't understand "happily ever after" puts Giselle adrift, only to be given a temporary home by Robert (Patrick Dempsey of Freedom Writers, TV's "Grey's Anatomy"). Robert is a divorce lawyer with a precocious, sensitive six-year-old daughter (Rachel Covey). Things quickly get tricky for Robert as his fiancee (Idina Menzel of Rent) watches a wide-eyed Giselle just out of the shower. Complications arise when Edward comes out of the same man-hole cover to the Big Apple in pursuit by Narissa's chief minion (Timothy Spall).

Enchanted finds its delightful way as the story kicks into its live-action setting as the creative gags use the animated sensibilities and fish-out-of-water premise well. Some will easily reference the likes of Beauty and the Beast, Snow White, and Sleeping Beauty, to name a few, with some noticeable touches into current social issues.

The production elements have a vibrant quality, especially the songs from Alan Menken and Stephen Schwartz, upstaging the fairy tale schematic, which finds a symmetry between the traditional (hand-drawn) animation and the photorealism of computer-generated imagery.

Marsden essays a vacuous charm, and Dempsey is a suitable handsome, if weary foil for him, as the film engages the possibility of storybook romance in the real world. Though Menzel is wasted as the dejected fiancee (too bad she wasn't given a chance to sing), Spall is game as the chameleon buffoon. Sarandon effortlessly takes charge when necessary in a campy turn.

But, it's Adams who proves most entertaining for kids and grown-ups alike, making the physical and emotional movements of Giselle winsomely "animated", whether in a park setting or cleaning up with a menagerie. With Julie Andrews doing the voice-over work, this gifted actress (Junebug, Catch Me If You Can) is just the comedic makeover to keep all of the predictable romance in a fanciful flight.