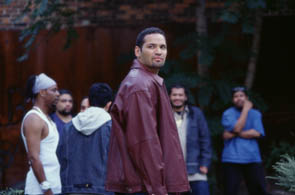 He plays Victor, a big-time drug dealer in the Bronx.  As his character explains through voice over, he eats, drinks and sleeps money.  And it's his unconditional focus on getting money at all costs, that through Victor's eyes, connects the two professions.

Victor works for drug queen Colombian (Isabella Rossellini) and after years of selling drugs, beating up competitors and killing his enemies, Victor wants to get out of the business and settle down with his girlfriend Carmen (Delilah Cotto).  His opportunity comes with meeting Wall Street wheeler dealer Jack Wimmer (Peter Sarsgaard).

Victor admires the lifestyle of Jack and wants to go "legit," yet still have a lot of cash.  He sees the lavish parties that Jack hosts, the penthouse he lives in and the designer clothes he wears, and Victor wants it.

Jack offers him a chance to invest in an offshore deal that promises a big return in a short time and of course, Victor jumps at the chance.

The film goes a bit too far trying to equate Wall street types with murderous drug dealers.  They might have had their share of crooked CEO's lately, but the comparison still stretches the imagination.

I enjoyed the exploration of the home life of the dealer.   Leguizamo was very believable in showing that Victor had deep love and a sense of responsibility for his girlfriend, and if he were only born in a different neighborhood and under different circumstances, he could have become a successful and "legit" businessman.