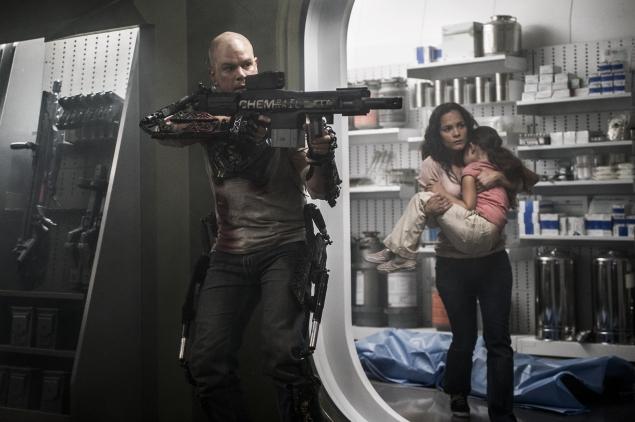 Elysium also starring Jodie Foster and Sharlto Copley doesn't trust in the audacity of its concepts sparked by prejudice and inequality, as well as issues like immigration and health care devolving into an elemental action/thriller.

South African Writer/director Neil Blomkamp (who made the more personally and cohesively felt parable with apartheid resonance District 9 which starred Copley) doesn't have the same post-apocalyptic connection and execution even with some stellar visual effects (complements of the WETA group) and settings which can be diversely striking like the recent disappointing Oblivion (a new choice for the Blu-Ray/DVD viewer).

The City of Angels in 2154 is part of an Earth polluted and overpopulated and mainly Spanish-speaking toiling in crime-ridden squalor (drawn from a Tijuana favela) while the eponymous lavish space station (modeled a little after Malibu) ruled over by Defense Secretary Delacourt, a thinly devious fluent in French Jodie Foster to confine the "illegals" from a place where atomizers keep its inhabitants healthy. Her big enforcer is Kruger, a fiendish Copley with a kind of unintelligible Dutch tongue.

The tale revolves around an Everyman-type, sympathetically played and evinced with noticeable grit by Damon, an ex-con factory employee exposed to life-threatening radiation, Max. In its way with setting and premise some viewers may be reminded of more inspired genre efforts like Soylent Green or a viscerally charged The Road Warrior (which helped propel Mel Gibson into Hollywood stardom).

Max and his nurse friend Frey (Alice Braga) going back to an orphanage as kids who has a daughter diagnosed with leukemia of course are impelled to get to Elysium needing assistance from a gangster, Spider (Wagner Moura) knowing his days are few. It's an opportunity to relieve a beaten-down crestfallen humanity when Max gets a special exoskeleton suit (maybe a knockoff of what Tony Stark uses) and neurologically neutralizing a corrupt executive (William Fichtner) through a special download for a massive "legal" overthrow.

Elysium often elides from gapes and a lack of nuance for a while and may offer thrilling, bone-crunching and explosive entertainment for a majority of the running time. But, like its Oblivion cousin the incredulous and fragmented recollections prove to be too off-putting despite a sheer energetic perspicacity. So, the sophomore jinx which hits so many is something that the crafty, canny South-African auteur can't avoid. Even as a head-shaven Damon (who knows how to shade his characters well as his work opposite Michael Douglas's Liberace recently demonstrated) proves to be somewhat of a survivalist, but Foster is relegated to an urbane, devious, but unpersuasive presence. What should have been more of a subliminal, defiant morality tale for its time irrationally hovers fatally into frustration.