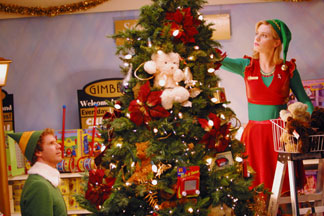 The holiday movie season has begun with a new Will Ferrell film, which is both charming and funny.

The story opens 30 years ago when a baby boy crawls into Santa's (Ed Asner) sack at an orphanage. Santa discovers the baby as he arrives at the North Pole and Papa Elf (Bob Newhart) volunteers to raise little "Buddy" as his own.

Buddy's happy at the North Pole, but he doesn't quite fit in, he stinks at toy-making and he's at least four feet taller than all of the other elves. Even so, he's surprised to learn that he's not an elf after, he's human.

Buddy decides to leave his merry little kingdom and head for New York City in search of his father Walter (James Caan), who doesn't know a son exists.

Walter's a no-nonsense, workaholic publisher, who has little time for his wife (Mary Steenburgen) or young son Michael (Daniel Tay). But, his life changes when Buddy shows up (fully dressed in his elf outfit, no less), at his Empire State Building office.

Ferrell is perfect in this role. He plays up his child-like innocence, which is all the funnier because of his height (about 6' 3"). He looks ridiculous roaming through N.Y. streets with pointed hat, yellow tights and upturned elf shoes, but he's oblivious to all the attention he stirs up.

The sight gags are great. Buddy sitting on diminutive Papa Elf's lap is a sight to behold and when he tries to cope with big city life in an encounter with an escalator which bent me over with laughter.

Unlike most films aimed at kids, there isn't a focus on non-stop burping and other bodily functions except for one loud burp that buddy exhales after downing an entire two liter bottle of Coke in one gulp.

There's a lot to like in Elf. A terrific cast, a sweet main character and a holiday message that is wrapped up in laughs and charm. I recommend Elf for the entire family.