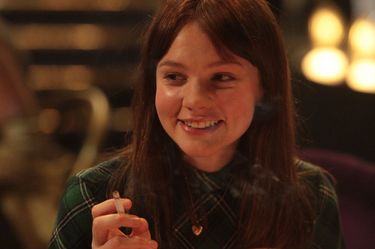 
Jenny (Carey Mulligan) in 1961 is about to turn seventeen when she is introduced to us. Her dad (Alfred Molina) wants a safe place for her life and he believes that a degree from Oxford is the answer. His mind begins to change when she dates an older guy David (Peter Sarsgaard). David treats her with opulent gifts, along with exciting adventures and a vacation in Paris.

Jenny's mother, Majorie (Cara Seymout) is believeable passive in the shadow of her dominating husband even when she is tempted to intervene and offer new directions for her daughter.

Mulligan is impressive as seventeen year old Jenny - she is smarter than Juno, even when her dialogue is less biting but just as convincing as she makes her way through a more complicated romantic equation.

Part of the world she lives in (it's 50 years ago) is marked by the idea that a girl doesn't need an education if she is someone ready to marry and take care of her. With that in mind Dad is very willing to support the relationship.

Mulligan carries the dialogue demanding our respect and admiration for her performance and her character. It might be compared to Mariel Hemingway's Tracy in Manhattan; she is more mature and stable than her older suitor. Young Graham (Matthew Beard) the clumsy kid who is not acceptable to Dad is no match for Sarsgaard's David who is smooth and has the patents to move slowly. He appears to be a safe place in the eyes of Jenny's parents.

Jenny takes some advantage of her situation showing off and bragging about her adventures in particular her ring which she flashes to her school mates even when the teacher who challenges her most and has admiration for her ability frowns on her actions. The head mistress (Emma Thompson) however is not amused and Jenny looses her place at school and has serious decisions to make which affect her life.

Mulligan delivers the solid script and leaves us admiring Jenny in a performance that should be remembered at award time.