The Edge of Seventeen 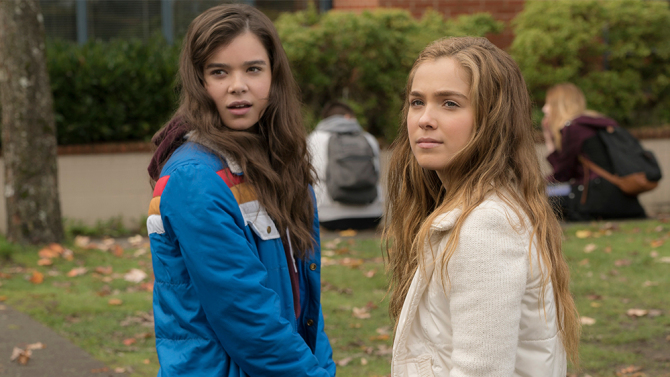 
The Edge of Seventeen is a comedy/drama film staring Hailee Steinfield, Haley Lu Richardson, Blake Jenner and Woody Harrelson.  The story revolves around a high school student named Nadine (Steinfield) as she goes through her junior year in high school.  Throughout her life she was constantly bullied but always had her best friend Krista (Richardson) around to help her through not only school but a dysfunctional family.  However, everything starts going wrong for her when Krista begins dating her brother, Darian (Jenner).  From there Nadine tries to get through her days occasionally seeking advice from her teacher Mr. Burner (Harrelson).

First thing first I found that Hailee Steinfield really stood out in her role as the main protagonist of the film.  She does an excellent job portraying a person who, in her opinion, has struggled her entire life to fit in.  The relationships she shares with the other characters in this film are very believable and helps you get emotionally attached to her as in one way or another most people could relate to at least one thing she is going through, if not more.  Woody Harrelson also was fantastic as Nadine's teacher and when these two were on the screen together were some of the best scenes in the entire movie. But all of the characters are very believable which in my opinion is a credit to the writing of the story.  Kelly Fremon Craig, who also directed the film, did an excellent job depicting a true to life story making it very easy to get invested in the film.

There were a few things wrong with this film, though none of them truly damaging to the film itself.  For starters I thought Nadine's mother, Mona (Kyra Sedgwick) was one of the weaker performances in the film.  Her character started off with a seeming favoritism towards her son, and as the film progressed she never really deviated from that until the very end of the film where her character seemed to take a 90 degree turn.  In fact the ending itself was an issue for me.  The movie tried its best to create a happy ending of sorts but many of the elements in there to create such an ending felt forced leaving character arcs like Krista's nowhere to be found.  This made the ending feel rushed and a bit disingenuous which really was a surprise given the rest of the film.

In the end though The Edge of Seventeen is a solid film with some spot on acting.  This is a movie that represents real life extremely well and is definitely worth seeing at some point, even if the ending was on the weaker side.