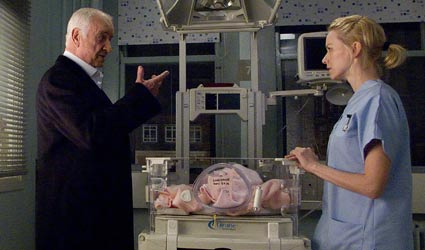 As in A History of Violence and Spider there are dark corners of one's nature not fully exposed. Insinuations arise as the script by Steve Knight (Dirty Pretty Things) involves us with rounded characterizations. And, Cronenberg hardly sticks to convention when it comes to how he handles the cast and storyline to reach conclusions that hardly come with the kind of clean finishes that lean toward the mainstream.

Watts' London midwife, Anna, and Mortensen's loyal Russian-born driver Nikolai form the important relationship in an unnerving picture filled with subtext. Like the wildly salacious actioner Shoot 'Em Up there is a mother who is lost, but a surviving infant who becomes paramount.

On a search for the deceased's next of kin, Anna comes into contact with Vory V. Zakone criminal mastermind and proprietor Semyon (Muller-Stahl), as well as his combustibly live son Kirill. She becomes drawn to their Russian-born driver, the arcane Nikolai, as his caring manner brings out suspicion in the shifty Semyon. The local underbelly feels threatened by the baby while a cop (Donald Sumpter) is warming to the disturbing nature of what is happening.

Meanwhile, Anna's sense of distress is confirmed by irascible Russian-born uncle Stepan (Jerzy Skomlimowski). It all becomes simmering through the motivations of Anna, the enforcing Kirill, and an imperious Semyon. Nikolai becomes embroiled in a web of murder, deceit, and retribution, and Mortensen brings a charged physicality, even psyche to someone subjugated to moral corruption. Watts, very natural in The Painted Veil as a petulant, adulterous wife in a cholera-infected China, essays a waifish credibility to someone encroaching such a malicious milieu.

With an ominous tone, Cronenberg has a way to dim the gruesome elements, with dark wit and unforeseen feeling, as the film's twists really are quietly divulged secrets worked through innuendo and rumor. A memorably vicious sequence occurs as just an elaborately tatooed Mortensen faces a couple of Chechen minions in a steam bath. From a damp, dank London Eastern Promises manages a striking cold efficiency when it comes to human treatment, thematically knowing how to stir the senses like the vivid, similarly startling aforementioned Dirty Pretty Things.