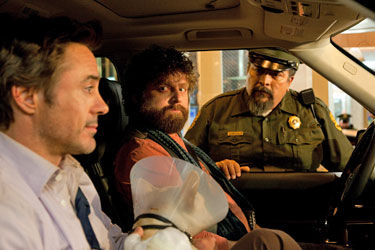 
More discomfiting than winsome, this new comedy from the maker of The Hangover must have looked better on the page than it does on screen.

Due Date still has a polished bluish gray tint to it thanks to Lawrence Sher's appropriate lensing for such a wild, shaky misadventure starring a harried, Robert Downey Jr. (Iron Man 2) and Zach Galifianakis (It's Kind of a Funny Story, Dinner With Schmucks). How they pair together may not be the kind of contagious humor that one expects as indicated in the marketing campaign.

Apparently the latter's simmering dorky aspiring thespian Ethan by happenstance is an instant spark for the former's high-strung architect Peter's growing exasperation once forced to hitch a ride. Peter has to get from Atlanta to Los Angeles to be with expectant wife Sarah (Michelle Monaghan, once with Downey in the more enjoyable less commercial Kiss Kiss Bang Bang) about to give birth to their first child in a mere five days.

Some (The Hangover crowd) may not have a problem with Peter's decision making in a film that has the schematic of a Planes, Trains, and Automobiles (with some familial similarity) doing the odd couple, "romance" thing (sharing a car for three days) without that film's unexpected, refreshing comic sparks. It's hard to get by such a common, peevish premise even what ends up being a lively, nerve-wracking cross-country time at the expense of friendships as well as motor vehicles, among other things, with a narcoleptic-induced smashup.

Without ID, credit cards and luggage,  Peter can't avoid what catastrophe comes along with this miserable, hirsute permed undesirable companion (with a French bulldog and the ashes of his father in a coffee can). In a relatively short running, there's enough discordant events with an amusing turnoff into the Mexican border. Peter's paternity even comes under scrutiny without divulging much about himself for a good while.

This sensationalized swath with more cheap gags than expected can rise from its more indolent plotting as Peter's bellicose side turning up, notably against the handicapped and a baby (not to mention what might bother PETA).

Like Peter, Due Date is maybe too tightly wound for its own good even with a few droll jolts at its disposal. It's not that the dissimilar leading duo don't deserve any empathy; Downey and Galifianakis appear to have that Laurel and Hardy thing going, but maybe both do it as the straight-man. Peter has a little more going for the character emotionally as Ethan's foibles mostly seem predicated to fit the storyline of misery inviting company, though it manifests the aplomb and timing of two sharp minds.

As in Phillips' more fitfully entertaining Road Trip there are noteworthy detours and scene-stealing supporting characters. If Monaghan is mostly window-dressing,  then Jamie Foxx (Valentine's Day) has an extended stay as Peter's old Dallas pal. Juliette Lewis (solid as a trashy ex-girlfriend in Conviction) makes an impression as a Birmingham grower of "glaucoma medication" for Ethan and Danny McBride better as an annoyed Western Union clerk. It's too bad that Galifianakis can't be more of a natural (Ethan looks up to Two and a Half Men) in a rage-inducing film (it's nice to see where Ethan ends up) that can't manufacture less aggravation and more uproarious creativity.