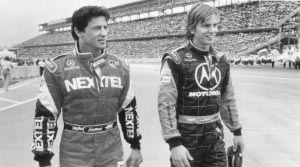 As screenwriter and producer, Sylvester Stallone has cast himself in a minor role.  He plays Joe Tanto, a retired Indy race car driver who comes back to the circuit as a secondary driver in a two man team.

You know you're in trouble in the acting department when the most natural actor in the film is Stallone.  Pardue and Schweizer are stiff and even when the two are fighting over a girl, they lack emotion.  Co-star Gina Gershon, who plays Tanto's ex-wife, is also a disappointment as she overplays her role of a bitter drunk.  Even Burt Reynolds screams most of his lines.

The saving element is the crashing that seem to be around every turn.  The action which takes place at Formula One type races in Chicago, Toronto and Australia is interspersed with the filmed footage.  In fact, the car crashes are so realistic, cars appear to fly right of the screen.  Tires, engines are fiberglass bodies soar straight at you, so much, we almost want to duck.

The pace of the movie goes along at breakneck speed, and thankfully is only broken briefly by dialogue.  A loud, rock soundtrack seems appropriate for cars that move at speeds over 200 miles per hour.

Director Renny Harlin (Cliffhanger) uses a variety of camera positions to tell his story.  They hover above the track to give a bird's-eye view of the racers below, or are mounted in the cockpit to examine the frighteningly fast view of the drivers, or just circle standing actors as they discuss their latest driving techniques.

Driven does offer just what it promises in the trailers; racing, car crashes, handsome drivers and Stallone.